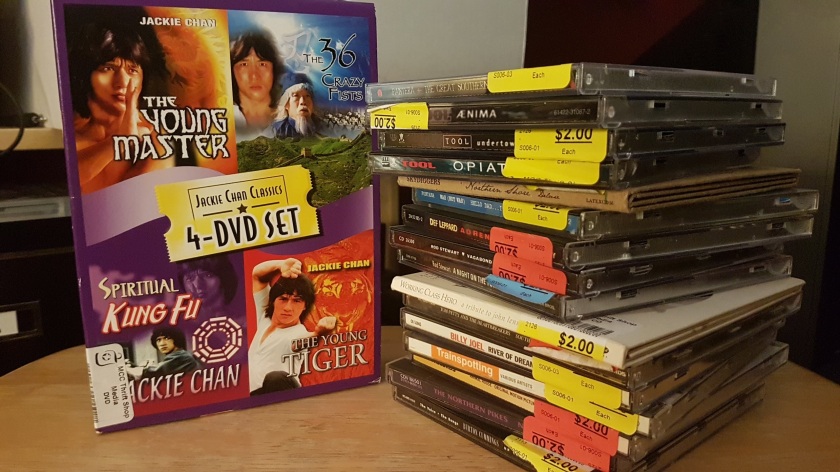 I headed over to Canadian Tire this morning with Sarah to pick out a new faucet for the kitchen. We found exactly what we needed within a few minutes and our exit timed nicely with the opening of our local mission thrift. Hmmm…. it might be a good idea to see what music they have. I mean, I’ll need something to listen to while I install it, right?

All of the CD were $2 moosebucks each, unless you spot a red tag. Then it was 75 cents.

The ’90s metal collection got a nice boost:

Pantera’s The Great Southern Trendkill isn’t my fav of theirs but it was the last I needed to complete the collection. And someone dumped out of their Tool collection. I never been much of a fan in the past but I’ll give the CDs a spin. Sometimes having the album gives you a different perspective. I don’t know why. Anyway, if I don’t enjoy these I’m sure someone in our group will appreciate them.

The Canadian collection got a nice boost as well:

The Burton Cummings album is a live concert from the ’90s. It looks like he performs most of his hits on it. I have already listened to The Northern Pikes Neptune and it is solid. Sarah’s keen eye spotted Skydiggers Northern Shore. It is a Deluxe edition with 3 extra CDs of music.

Crazy! If I read the internet right, this was a special order set that was only available on their website in 2012.

I found a couple of soundtracks:

I still haven’t seen Trainspotting but I know a lot of the music from it. Animal House is a pure classic.

I’ve never seen this John Lennon tribute album before. Should make for an interesting listen. Cheap Trick does Cold Turkey on it. Tom Petty’s Southern Accents and Billy Joel’s River of Dreams are not best album from either artist, but both are fine for a cheap CD addition to the collection.

As long as it isn’t one of those albums loaded with old standards, I’ll add it. Vagabond Heart has Broken Arrow and The Motown Song on it so… must buy? Yeah, I think so.

And here is what Sarah got:

I remember buying Adrenalize on cassette when it first came out. I listened to the first two songs on my Walkman, removed the cassette, then gave it to my Sister. I’ve always liked the name Was (Not Was). I don’t really know who they are.

And I found a four back of Jackie Chan DVDs!

Hopefully the quality is good and they don’t look like arse! meh, they’ll still be fun watches even if they do.

Oh yeah, and installing the faucet was a lot easier than trying to figure out what was wrong with the old one yesterday.