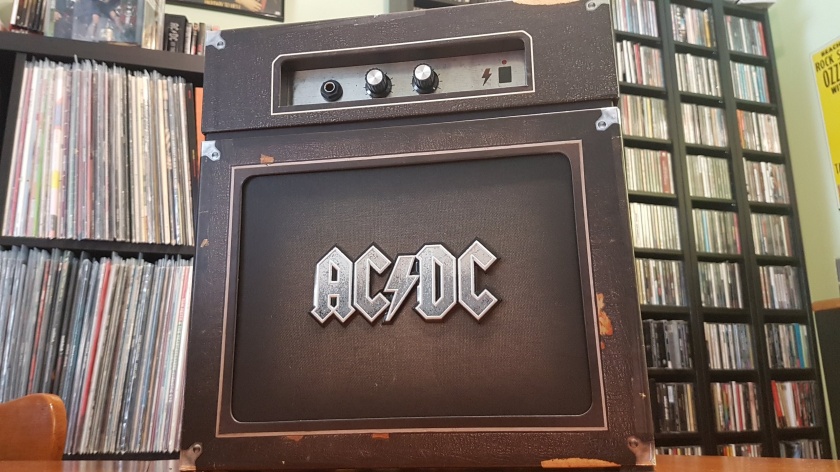 When Napster was brand spankin’ new I remember the first tunes I downloaded were all of those tasty Australian AC/DC tracks I did not have access to. R.I.P. (Rock In Peace), Crabsody In Blue, Cold Hearted Man, etc. Each song took at least 20 minutes to download at a bitrate of 128k, but I could hear them at last! Technology!

In 2009, AC/DC gave them the official release treatment in North America via the boxset, Backtracks. There were two versions, a 2CD/1DVD budget release for approx. 40 moose bucks and a deluxe edition that got you 3CDs, 2 DVDs, the rare studio tracks on vinyl. But 200 moose bucks! Yikes!

In 2009, Sarah was starting a new job and I had quit my miserable one for one with less misery and pay. So, I became a Backtracks peasant with the budget release. That was until 2018, when the bank account was in a much safer state and I found a deluxe edition on amazon for 180 moose bucks, shipped. I didn’t even know they still had any! It was pricey but worth it if your level of fandom is high enough.

For brevity, I’m just going to stick to the audio and video content of the set. I made an unboxing video in 2018 where you can check out the packaging and physical items, including a (sort of) working guitar amp:

For the three CDs in the set, none are built for a balanced listening experience. They are designed for fans who want an archive of the tracks they are missing. Backtracks delivers them in chronological order, starting with the studio tracks that were only officially available in Australia since the ’70s through to the bonus tracks from extended edition of Stiff Upper Lip from 2000.

CD 1 is made up of studio rarities. It makes for an excellent addition to your collection if you own all of their studio albums, Who Made Who (the soundtrack for Maximum Overdrive), the EP ’74 Jailbreak, and the Bonfire Boxset because this will make you whole. You’ll have everything they released. If you don’t, well it is a bit of a bummer how the complete discography is still spread out among all those releases. Backtracks makes none of them obsolete.

It’s a Long Way to the Top (If You Wanna Rock ‘n’ Roll) and Rocker are a couple of odd inclusions. They have been released here previously in North America, and even if they are the “Australian versions” they are not any different. You do get extended versions of Dirty Deeds Done Dirt Cheap, Ain’t No Fun Waiting Around to Be A Millionaire, and High Voltage. The songs were originally edited due to them getting switched around onto different releases in North America. Although, High Voltage still fades out before it is supposed to… but meh. That is getting really picky.

Discs 2 & 3 do a better job of making collecting easier. They are loaded with the live tracks that were originally spread out among numerous singles and one extended edition. So, these two CDs save you from having to collect all of those.

Over on the DVD side, DVD 1 is the continuation of Family Jewels. The original 2 disc set ended after the promotional videos for The Razors Edge were done. This 3rd disc begins with Big Gun from 1992 through to the Black Ice promo videos from 2009. Also included are any duplicate videos that were previously skipped on Disc 1 and 2. So you have alternate videos from Highway to Hell, You Shook Me All Night Long, Jailbreak, and It’s A Long Way To The Top (If You Wanna Rock ‘n Roll). It is funny to see how the (already outdated by 2009 standards) menu system is still intact, but at least the videos are enhanced better for a widescreen TV. No VHS transfers here.

DVD 2 is a real treat. It is of a performance the band did in Munich, Germany at Circus Krone in 2003. A couple of tunes from this show are on Plug Me In, but this time you get the entire show. The venue’s intimate setting combined with the band mixing up the setlist makes for a stellar show. It opens with album track Hell Ain’t A Bad Place to Be and is loaded with others like What’s Next To The Moon and If You Want Blood… You Got It! When they broke into Rock ‘n Roll Damnation it sounded like they were still in 1978. Johnson’s voice was the only giveaway.

The other bonus is the crowd. They were WAY into it. Brian was even joking with them about how they know what song is coming before he did. And Phil lighting a cig while playing The Jack are is another highlight. Really good times.

The final disc with music on it is Rarities, a vinyl record with the rare studio tracks minus the deluxe exclusives. None of the tracks on here are easy to track down on vinyl, so this makes for a solid edition.

This is a tough one to judge. It is not entirely practical, but for someone like me who needed to fill the blanks in my collection, this does a 5/5 job. But, none of these rare tracks are going to rival Whole Lotta Rosie or Riff Raff for the title of the best song, nor are any of the live tracks a “definitive edition.” For those reasons, I think most will be satisfied with the budget edition of Backtracks even if you are missing out on a few goodies like the Circus Krone show. At least you can enjoy what they posted from it on YouTube. Like this one: