B sides win 1992-2008 was originally released in digital format in 2010 as a collection of “extras, bonus tracks, and b-sides.”  Now, the release is getting the vinyl treatment!

Vol. 1 is limited to only 1200 copies that you can still grab (as of this writing) right here.  Don’t fall for the scum on eBay who are claiming it is sold out while charging over $100 for a copy.

The first tune, Underwhelmed is the best known one on here.  An early hit for Sloan that did make an appearance on their debut EP Peppermint and again on their first album Smeared.  It is unlikely that most fans have this version which is originally from a 1992 cassette compilation of Halifax bands called Hear & Now.  It is the same recording that is on Peppermint but a different mix.  Really fun to listen to where it all began.

The middle part of the album are a bunch of tunes that made it onto 12″ and CD singles at the time.  They all vary in quality, but mostly good by my ears.  You have songs like Amped, Pillow Fight, and D is For Driver, which display the signs of things to come.  Heck, I’d even say with a little polish they could fit on a current album.

Really, I was expecting experiments like Sleepover, a slow prodding Frogstompian grunge tune.  Not really my thing, but understandable for a band that was finding their footing in the early ’90s. 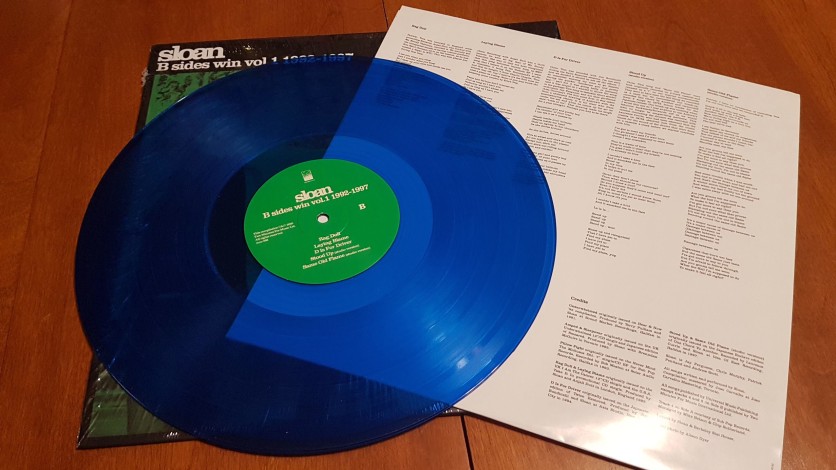 The vinyl comes on this handsome blue disc with a sharp green label. The liner notes give a little write up on each tune for when and how they are recorded. A great archive for fans to nerd over!

Stood Up and Same Old Flame are listed as ‘studio versions’ as they are different from the 7″ single recordings.  These originally appeared on the Japanese CD of One Chord To Another.  Now we don’t need to hunt that down!  Both are like having more One Chord To Another!  An excellent treat!

I enjoyed B sides win vol. 1 1992-1997 better than I thought I would.  I thought dividing the original release would create an incomplete feeling.  Instead, it turns out I really enjoyed having only 9 tracks to digest instead of all 16 at once.  It gave me time to focus on and appreciate them.

I was also prepared to grade this on a curve.  I thought it would be unfair to judge work that was originally meant to be a one-off experiment or bonus track almost 30 years ago the same as I would for new music.  This turned out to only be partly true.  This is not where new fans should begin their journey as the main purpose is to fill the gaps in the hardcore fan’s collections, but the Sloan we know turn up often enough to hold their own and make this a solid listen.