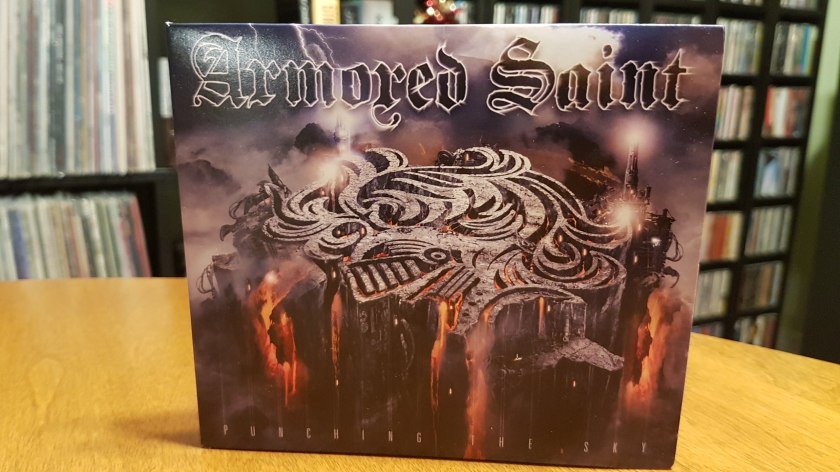 I am hardly an authority on Armored Saint.  For me, they have been the “other” band that features front man John Bush.  I discovered Anthrax in the ’90s when Bush was with them and it was very hard for me to disassociate him from them.

With Joey Belladonna now firmly planted as Anthrax’s front man, it seems that another reunion with Bush is unlikely anytime soon.  So, I gave Armored Saint’s latest offering, Punching The Sky, a spin.  Maybe they could get that ’90s Anthrax itch that I have been wanting to scratch for a long while.

Armored Saint seemed to be on stand by for Bush.  During his comings and goings with Anthrax,  they were there for him to fall back on.

I have to respect that.

Puching The Sky is Armored Saint’s first album of new material since 2015.  Bush and Bass player Joey Vera share a writing credits on all of the tunes on while the Sandoval brothers pop up here and there.

The album’s opening track, Standing on the Shoulders of Giants has that riff where I knew I was in for a good time.  These guys have the hooks!  And the “Punching the sky everyday” chorus is catchy.  It definitely has that driving flow I can recognize from ’90s Anthrax.

The 2nd track, End of the Attention Span has more of a thrash-metal chugging riff that I think will appeal to most hard rock/metal fans.  It is really pre-chorus and chorus in this tune I think separates Armored Saint from the rest.  If you like it, your probably a fan.

The rest of the album is a mix of mid tempo riffs like Bubble, My Jurisdiction, and Fly in the Ointment with more heavy tunes that I prefer like Do Wrong to None and Missile to Gun.  But I appreciate the variation as the album never becomes dull or repetitive.

Unfair is the only true mellow tune on the album and I didn’t care for it at first but it is really slow burn that reveals itself towards the end.  I started enjoying after a few spins and now it has become on of my favs.

The album goes out on a high note with Never You Fret which might be my favourite closer of 2020.  It’s a tune that oozes with confidence with the right amount of chug on the guitars.  I love the break down in the middle and the back to back guitar solos by P. Sandoval and Jeff Duncan which had me thinking of Iron Maiden’s Murray/Harris or Judas Priest’s Downing/Tipton.

The more I think about it though, these guys started in ’82 which makes Murray, Harris, Downing, and Tipton closer to contemporaries than their mentors.  Kind of sad when you think about how they haven’t got the same amount of recognition.

Well, I’m guilty too.  Here I am in 2020, finally giving them a chance, and it has been a positive experience.  No longer will I deem Armored Saint as the “other guys”.  I think what I have learned here is John Bush is a bigger part of ’90s Anthrax that I enjoy.  Armored Saint (at least here) are not as riff heavy as that band was, but their more melodic style allow Bush’s writing to shine even more.