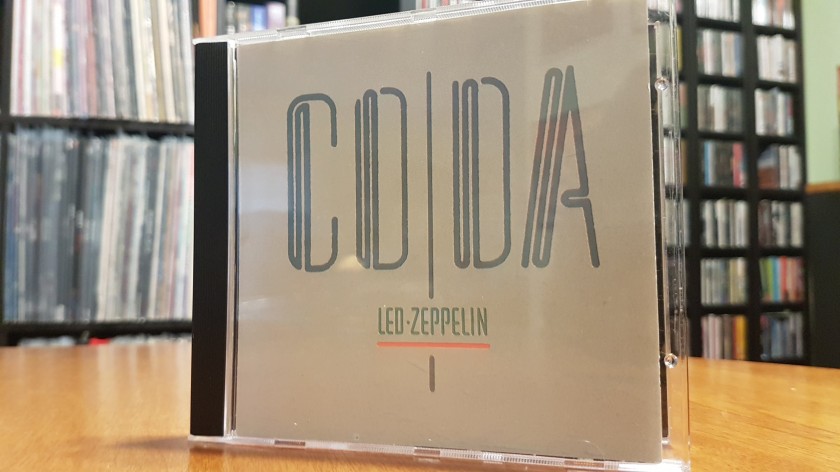 Welcome to the 9th (and final!) installment of my Led Zeppelin studio album reviews!  These are tandem reviews with my amazing wife, Sarah who is posting her own over at Caught Me Gaming.  So be sure to check out her write up on Coda right here!

As for me, I can sum up Coda like this:

A little uneven, but alright.

After the passing of John Bonham in 1980, the group’s remaining members wanted to land the heavy blimp for good, but they had one more studio album to record to fulfill their contractual obligation to Atlantic Records before they could do so.  And that is how Coda came to be.

The album is a collection of mostly studio outtakes from their previous studio albums, and since their contract specified a studio album, hijinks were afoot for two of its songs.

To cover up evidence that they were recorded live, both the album’s opener, We’re Gonna Groove and I Can’t Quit You Baby were remixed, overdubbed, and had the live audience removed.  In reality, both were recorded live on from January 9th, 1970 in London.

The rest are legit studio outtakes.

Poor Tom was recorded during the Led Zeppelin III sessions, Walter’s Walk is an outtake from Houses of the Holy, and Bonzo’s Montreux is recorded by Bonham in Montreux, Switzerland in 1976.  The rest, Ozone Baby, Darlene, Wearing and Tearing are studio outtakes from In Through the Out Door.

And how are these songs?  Well, I’m glad you asked.

I like my rockers and We’re Gonna Groove was designed as a show opener to get bums out of seats.  I gets mine moving when I hear it.  Poor Tom is quite good with its shuffle beat and it would have been one of my favs from Zep III.

I didn’t really need another cover of Otis Rush’s I Can’t Quit You Baby from Zep.  I can’t phantom why it is on here as I don’t find it that much different from the one that is on the debut album, Led Zeppelin.

I do like Walter’s Walk but I can see how it would have been hard to find a place for it on Houses of The Holy as it has sounds closer to something on Zep’s previous two albums.

Darlene is the hidden gem.  It’s the closest the album gets to a big Zep riff from the glory days.  Page rips a couple of bluesy solos, John Paul does the same on the piano, and Bonham has some excellent drum fills.  A fun track to listen to and one that you don’t hear too often.

I can more leave than take Bonzo’s Montreux.  I’m not a fan of big drum solos.  Fun to watch, but a bore to listen too.  It does have more melody than Led Zeppelin II‘s Moby Dick as it has some melody, but then I found out how Page added in electric sound effects after the fact.  I’m disappointed how it wasn’t Bonham was hitting some device that played them down.

Wearing and Tearing wraps up the album on a rocking note.  It’s a bit of a frantic number though.  Not bad.

All that is it.

Coda is a short album of only 33 minutes making it a crime to not have included such tracks as the B-side to the The Immigrant Song‘s single, Hey, Hey, What Can I Do or Travelling River Side Blues from their BBC recordings.  Neither had a home in 1982.

The songs that did make the album are decent, but awkward to listen to as a collection.  I don’t believe I Can’t Quit You Baby and Walter’s Walk were ever meant to go back to back on any album, yet here they are.

But the majority does work.  And there are extended editions of Coda that now include the tracks I mentioned.  I wonder if I have a legit reason to upgrade my copy….