I put Van Halen’s debut on the turntable for my wife the other day.  She’s enough of a fan to know the songs but doesn’t have the catalog memorized like I do.

After a few tunes, she asked, “Which one is this?”

“Their first” I replied.

Yeah, that is this album in a nutshell.  A debut that plays like a greatest hits compilation.  Van Halen was one of those bands who had toured for years before signing to a major record label.   So, when it came time to record they just put their live set to tape for Warner Bros. producer Ted Templeman.

“We didn’t have a ton of material”, recalled bassist Michael Anthony, “so we basically just took our live show and all the songs we knew and went for it. The whole album only took a couple of weeks. Ted Templeman wanted to make a big, powerful guitar record, and he had all he needed in what Eddie was doing.” – musicrader.com

Eddie Van Halen’s guitar playing was the band’s major force, highlighted by the 1-minute and 42-second one-off solo, Eruption.  His style was big and flashy while connected to a melody and rhythm.  His playing would go on to directly shape hard rock music for the next decade, then continue to be a major influence on what followed beyond.

But as legendary as Eddie was, all four members of Van Halen were incredibly lucky to find each other.

Bassist Michael Anthony and Eddie’s brother, drummer Alex Van Halen would create a rhythm section with a distinct driving sound.  There are not many bands you can immediately identify by only the playing of their drummer and bassist.  Michael Anthony’s high vocal range as a backup singer was a valuable asset as well.

Singer David Lee Roth’s was not only a vibrant personality but also had the ability to come up with catchy vocal melodies to layer over Eddie’s far-out guitar riffs like in The Atomic Punk or On Fire.  If fact, I highly doubt this album would have been easily excepted as it were without Roth to aid the masses in connecting to it.

The band was so wild and out there it is little wonder that a cover of the well-known Kinks tune, You Really Got Me was chosen as the album’s first single.  It was a brilliant move to connect something familiar to the bold and new.

Above all else though, these guys were having a staggering amount of fun.  Looking at the lyrics for the album’s opening tune, Running with the Devil and they read as downright depressing:

I found the simple life ain’t so simple
When I jumped out, on that road
I got no love, no love you’d call real
Ain’t got nobody, waitin’ at home

But the song features car horns, a children’s toy, and Roth shouting “Oh yeah” into the stratosphere.  They are telling you how tough life on the road can be while bouncing off the walls with excitement.  That high-spirited energy really spoke to me.

Van Halen had all the right ingredients and they executed them well.  Big-bluesy riffs, furious classical style guitar solos, a driving rhythm, and DLR hamming it up.  It is a perfect album with similar magic you can find on debuts from The Beatles, The Jimi Hendrix Experience, Stevie Ray Vaughan and Double Trouble, Black Sabbath, Guns ‘n Roses… I could go on.  Without a doubt, Van Halen’s belongs right there with them.

As a Van Halen Album: 6/5
Compared to everything else: Get this if you like Rock ‘n Roll. 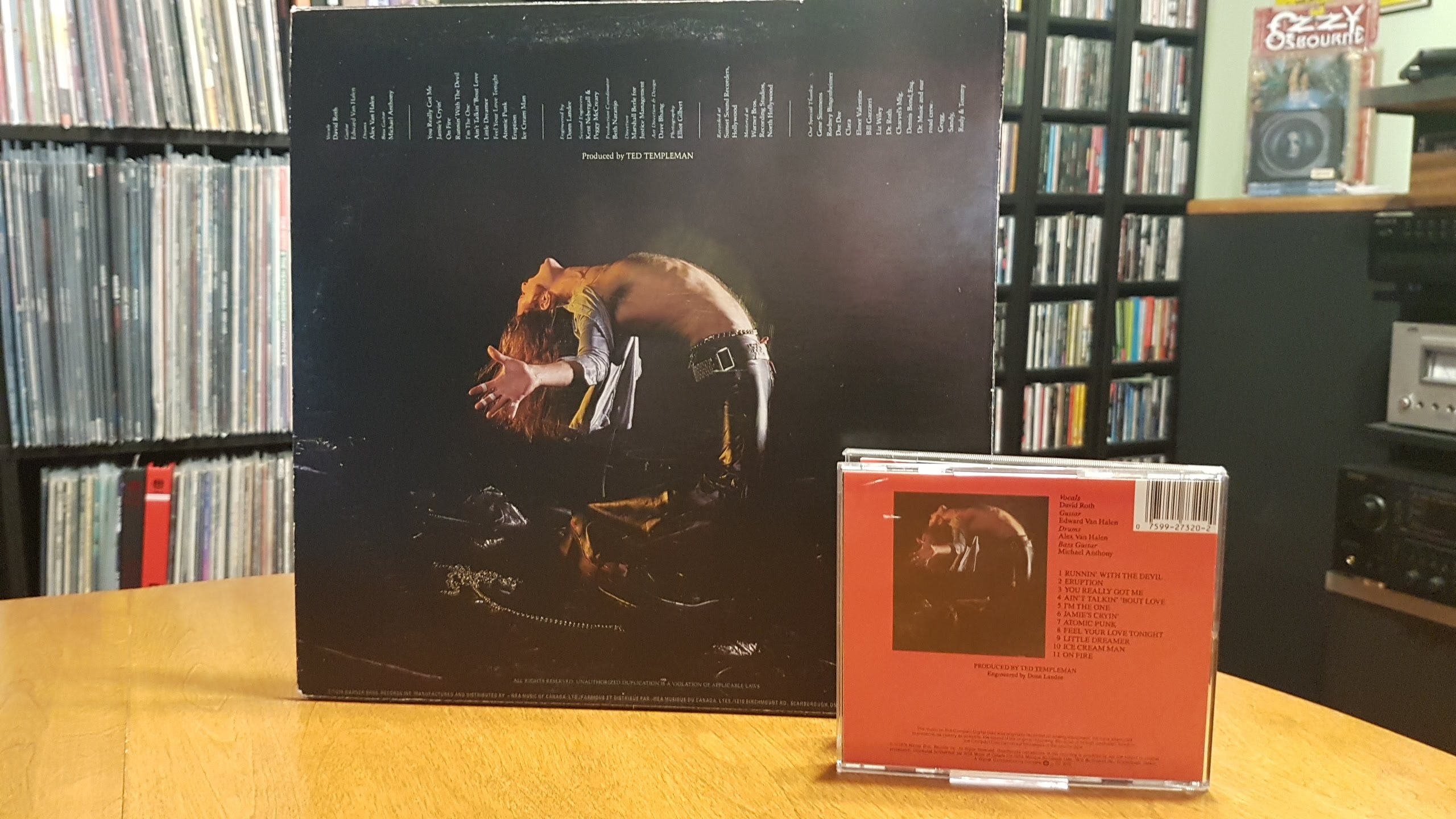