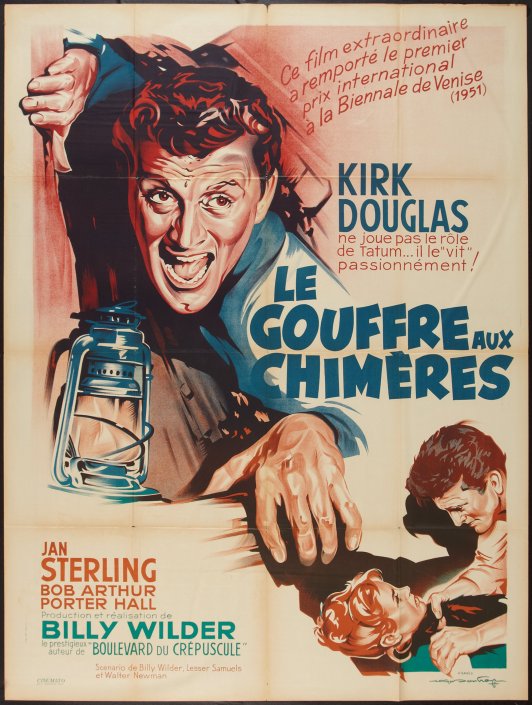 I first watched Ace In the Hole during an emotional time for me.  It was a couple of summers ago in my childhood bedroom.  I was helping my Mom move from the house she had lived in since 1975 and I choose Ace for two of reasons:

1.  It was a Billy Wilder movie that I had yet to see.
2.  After reading the description, it appeared the people in the movie were having a worse time than I was.

The film stars Kirk Douglas (Lonely Are The Brave)  as the ambitious, and egocentric reporter, Chuck Tatum.  Having just lost his prestigious job as a reporter for a New York City paper, he heads west until his car breaks down in Albuquerque, New Mexico.  Out of money and options, Tatum charms his way into a job for the Albuquerque Sun-Bulletin, which you get the feeling is the city’s third or maybe fourth most popular paper.  The price they pay for shying away from sensationalism and sticking to the truth.

Tatum’s first year at the paper is uneventful but he becomes restless as he grows tired of covering small stories like rattlesnake hunts.  While making a pitstop to gas up his car in a small New Mexican town, he learns about a local man, Leo Minosa (Richard Benedict) who has become trapped in a cave after the ceiling fell in on top of him.

After conversing with the rescue effort team, Tatum learns that it will take about a half a day to get Leo out.  That would be enough for one story that might go nationwide and forgotten the next day.  If he could somehow stretch the rescue effort to take a week, that is the kind of story that can build over time.  And that kind of attention would earn him the name recognition he needs to get back into the Big Apple.

But can Leo survive a full week in a damp cave, injured and trapped under boulders?  Well, after making a deal with the corrupt local sheriff and Leo’s family, Tatum decides that is exactly what he is willing to find out for a chance at reclaiming success.

Ace is a biting social commentary on the press and its relationship with the truth, which is unfortunately still relevant today.  As the current President of the USA will bluntly label all mainstream as “Fake News”, his claim is only 99.9% wrong.  Like any great conspiracy, there is that .01% grain of truth that can support it.  Many of us already know the media have been guilty of making the facts appear to be direr than they truly are.  And I’ll always point to this video as my all-time favorite piece of evidence:

Ace’s plot is closer to the truth than most films as it is based on two real-life events.  The first involves W. Floyd Collins, who was trapped in a sand cave in Kentucky following a landslide in 1925.  The story was turned into an event by the local Louisville paper, the Courier-Journal, which earned reporter William Burke Miller a Pulitzer Prize.  The second took place in 1949 when a three-year-old girl,  Kathy Fiscus fell into an abandoned well in San Marino, California, another case where the story became a spectacle.

And heck, anyone my age remembers Baby Jessica who was stuck in a well in 1987.  I even watched the made for TV movie that was based on the event.   We got a great episode of The Simpsons out of it too:

Geez, if I think about it… Bart was sort of the Tatum of that episode.

Anyway, Ace is by far darker than an episode of The Simpsons with true to life moments that will have you shaking your head.  Wilder doesn’t let anyone off of the hook as the press, elected officials, and a gullible public are all given an equal amount of blame.  And kudos to Kirk Douglas (rest easy) who is on my shortlist of actors who can successfully pull off a despicable and engaging character like Chuck Tatum.  #MarsApproved