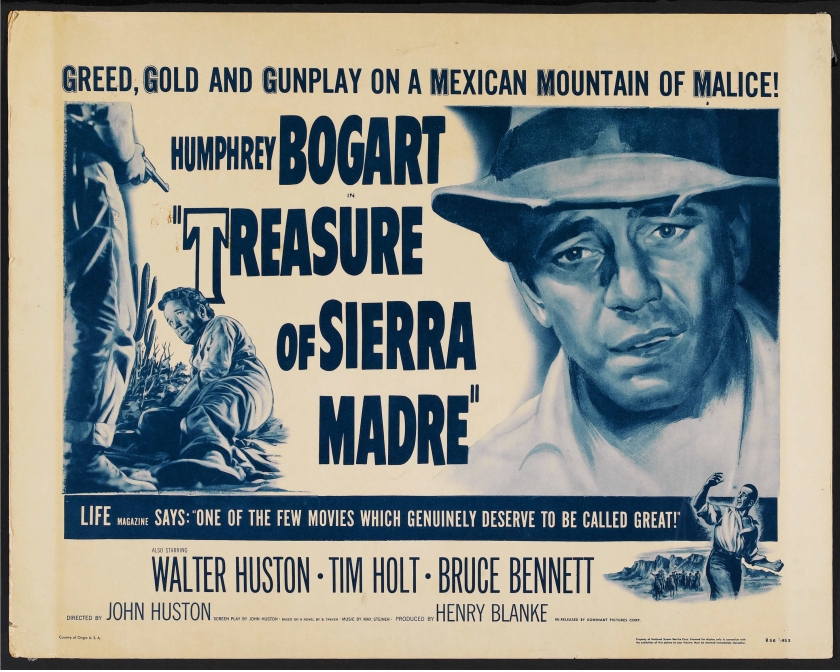 We don’t need no stinkin’ badgers

I was way overdue to watch The Treasure of the Sierra Madre with fresh eyes.  I think the last time I saw it might have been after I borrowed a friend’s copy on VHS sometime in the late ’90s.  Thankfully it aired on TCM the other day, and I got to it right away.  The few constant readers who picked up on how I enjoy Bogart, and have been asking me about this one are excellent motivators too.

The film follows Fred Dobbs (Humphrey Bogart) and Bob Curtain (Tim Holt), two unemployed Americans looking for work in the coastal Mexican town of Tampico in the 1920s.  They both struggle to find legit work and have bottomed out after a labour contractor cheats them out of 8 weeks’ worth of pay.

After a chance meeting with Howard (Walter Huston), a prospector who believes there is gold in the mountains of the Sierra Madre, the two scrape enough cash together to fund a mining operation with him.

After Howard leads them to a good vein, the trio gets to work and begin to build a small fortune in a few weeks.  During the evenings the men discuss dividing up the gold while having heavy concerns about being discovered and getting past banditos on their way back to Tampico.  But after a few weeks of mining, the real enemy creeps in.  Dobbs begins to become paranoid over his belief that Curtain is trying to steal his cut of the gold.   Dobbs becomes consumed by it, and things get deadly.

To me, the most interesting part of The Treasure of the Sierra Madre to me is how Dobbs becomes paranoid.  At the beginning of the film, he is down but not out.  He puts up the larger share of the dough to get the mining project started.  He’s the one who convinces Curtain that the risk is worth it.  But it isn’t until after Howard, who has a lot of experience, begins to tell the stories of how distrust has made previous runs go sour.  And it becomes worse as the pot grows.

Howard is the one who suggests they each find a hiding spot for their share of the gold and to keep an eye on each other.  And I wonder if Dobbs’ mind would have even gone down the path it did if it were not for Howard’s insistence that it would.

Bogie’s performance in The Treasure of the Sierra Madre is another example of how ahead of the curve he was.  I’ve always liked how in Die Hard, John McClain becomes more and more disheveled as the film moves on.  But here is Bogie, doing it in the ’40s.

“Wait till you see me in my next picture,” Bogart shouted to a movie critic outside a New York nightclub. “I play the worst s— you ever saw.”

Despite there being countless stories about a person(s) taking a big risk to make it rich, The Treasure of the Sierra Madre remains timeless as it stays true to one simple premise:  A man is consumed by greed.   There is so much more this movie executes well, that we will be here all day if I try to mention them all.  #MarsApproved, biggly.  Now: