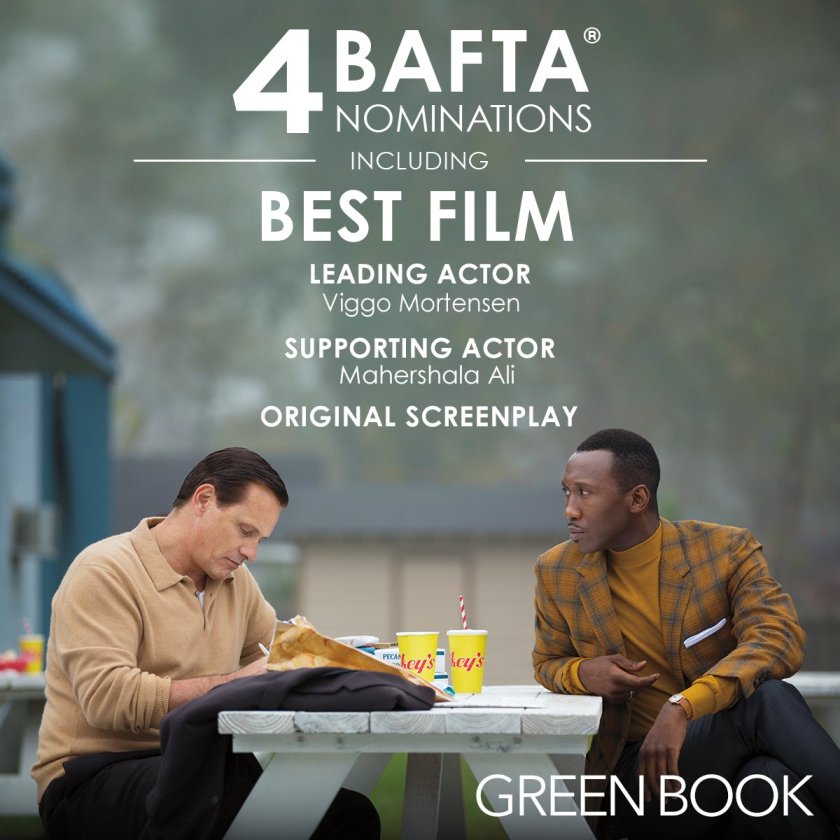 It’s Not Easy, Being Green

1962 at the Copa, Copacabana Night Club in New York City, “Tony Lip” Vallelonga (Viggo Mortensen) is working as a bouncer when he is laid off for a temporary shut down.  Looking at a few months without pay, he accepts a job offer to escort a musician, Dr. Don Shirley (Marershala Ali) on an eight-week tour in the Deep South.

The job will not be easy.  Dr. Shirley is a black man invited to perform at many high-end establishments while the South is still enforcing Jim Crow laws, and Tony needs to ensure that Don arrives for every performance.  To help, Don’s record label provides Tony with a copy of the Negro Motorist Green Book, a guide used by African-Americans to find hotels and restaurants that will serve them in the South.

At first, the two get along as well as the odd couple with Tony being the slob, while Don is more intuned with etiquette.  But as their relationship grows, they begin to become fond and eventually learn from each other.

If all of this sounds a little generic, it is because it is.  The story is convenient and loaded with tropes.  Although you have seen this type of movie before, Green Book hits its notes well enough that it doesn’t matter.  Mortensen and Ali are enjoyable to watch in every scene and the story is told well.  It’s formulaic but not overly contrived.  I had a good time with it.

At the end of the film, I was surprised to learn how it is based on the real-life experiences of two men.  As I do after watching any film that is based on real-life events, I head to the internet to see how well the movie sticks to the truth.  But instead, the internet is really upset about something else…  Green Book is VERY CONTROVERSIAL!

Although racism in America during the 1960s plays a major role, to some Green Book is “tone deaf”, “whitewashing”, and it “spoon-feeds racism to white people”.  Viggo’s Tony Lip is a “white savior”, while Ali’s Don Shirley is a “magical Negro”.

Some want you to believe the film is racist!  Others defend!  Let’s die on this hill!

I found it ironic how the internet is at war over a piece of entertainment whose central message is about understanding and acceptance.

Well, I understand.  It’s true how Green Book doesn’t dive deep to expose how the ugly Jim Crowe South was for people of colour, and by removing those laws society has only managed to sweep racism from its surface.  Films can be powerful and can leave people with a false sense of reality, and it is possible that Green Book could do just that.  So, I accept.  I believe anyone is justified for not feeling satisfied with the film for shying away from the grim truth.

While I won’t defend Green Book for its oversimplification of a complicated situation, I don’t believe it should be a requirement for every film about racism to get into the weeds.

Check out this clip of Elmo and Whoopi Goldberg on Sesame Street:

Two people from different backgrounds come together, explore their differences, and grow.  Elmo and Whoopi do not need to get into the ugliness of racism when the goal is to destigmatize our differences.  Green Book is about the relationship between two nuanced individuals and not a history lesson.  I think sometimes we become so focused on what a movie doesn’t do, we forget to take it for what it is.

Oh, and I did eventually get to how true to life Green Book is.  From what I can tell most of it probably isn’t.  Tony’s son wrote the script and you can tell he looked up to Dad.  The Shirley family denies a lot of it.  Both have passed away so they are not around to ask anymore.  Take it all with a grain of salt.