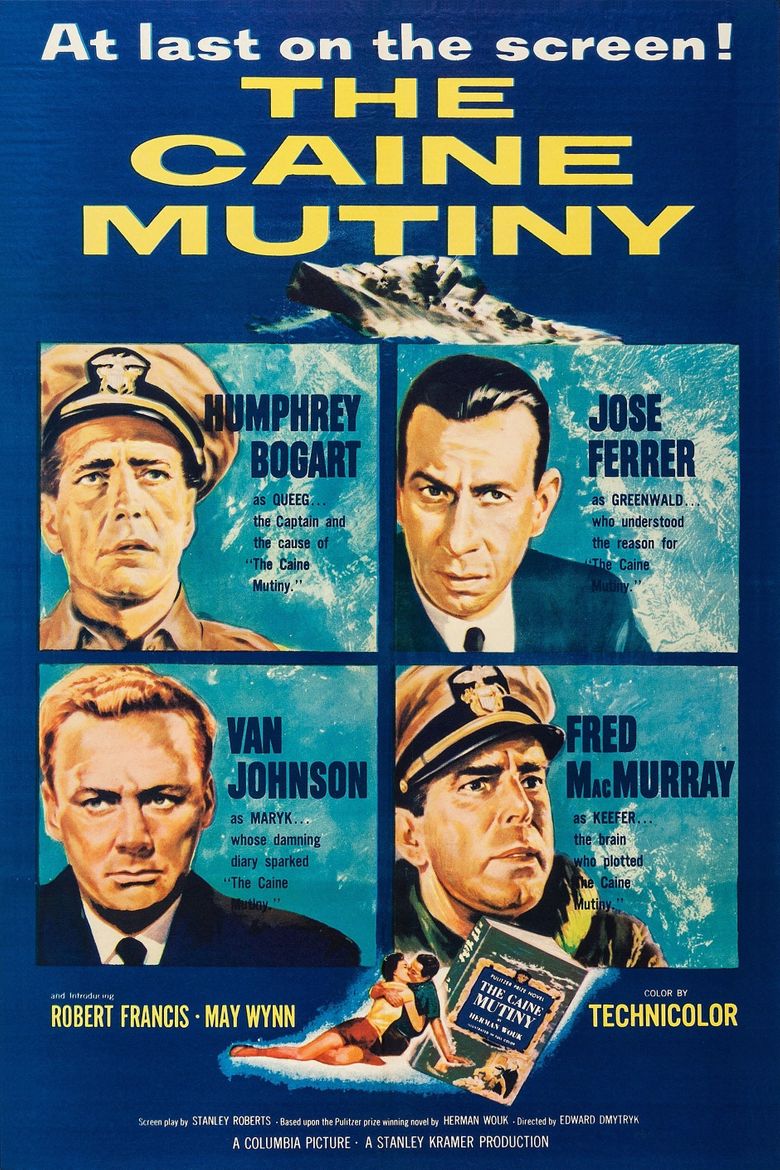 After the success of The Maltese Falcon and Casablanca, Humphery Bogart could have had a solid career playing “Bogie” over and over again.  But the dude wanted to act and would constantly challenge himself.  I always press record on any Bogart movie I haven’t watched before and have been pleasantly surprised to see him play villains in films like The Two Ms. Carrolls and Conflict.  For The Caine Mutiny, Bogie steps it up further with a complex lead role that is neither the hero or the villain.

The film’s main protagonist is Ensign “Willie” Keith (Robert Francis), a US Naval Officer who reports to the USS Caine, a minesweeping vessel assigned to Pearl Harbor during World War II.  Keith doesn’t really care for Caine’s commander, whose laissez-faire attitude with the ship’s crew has allowed it to become unruly.

When the ship’s command is given to Lieutenant Commander Philip Queeg (Humphery Bogart), Keith is relieved to see his new boss immediately instill discipline and insist on everything done to Navy regulation. But he and Caine’s other officers soon discover Queeg’s micromanagement is a cover for his incompetence and cowardice.

Although the crew is able to see through Queeg’s facade, especially after he begins to blame them for his mistakes, with no substantial proof to present to the higher chain of command, so the officers must continue to let his incompetence slide.  But when Queeg’s paranoia places the ship and crew in jeopardy during a typhoon, 2nd in command, Lieutenant Steve Maryk (Van Johnson) and Keith relieve Queeg.  When Queeg regains command, he orders the Caine back to habour where now Maryk and Keith face a court-martial and possible death sentences for mutiny.

Watching Bogie shift his entire body language as brings Queeg’s inner struggles to the surface was a real treat.  At times the “old Bogie”, the Sam Spade or Philip Marlow, would come out with that hero swagger, then he would switch to a person someone who was completely unsure of himself.  As a viewer, I was questioning how far gone Queeg actually is.

His performance earned him an Academy Award nomination for Best Lead Actor (he lost to Marlon Brando in On The Water Front.  I guess I can see that.) despite already becoming seriously ill with throat cancer.  It is the first movie I’ve seen him in where he did not take a drag from a cigarette!

Speaking of drag… The only part of the movie that didn’t sit well with me was the awkward side plot where Keith has to choose between a girl he loves and… his Mom.  Oof.  I wish I was joking.  Apparently, the director, Edward Dmytryk, wanted a longer run time to better explore the complex characters from the novel the film is based on, but the studio insisted on no more than 2 hours.  So, perhaps this is a result of some compromises being made.

I enjoyed the rest though.  I am still impressed by how I’m able to suspend belief and get a thrill from watching a model boat in the bathtub get tossed around!  But I’m also the type of person who prefers the original special effects in Star Trek over the newer CG ones.  So your mileage may vary!

Both Fred MacMurray who plays the spineless one in the group, and Jose Ferrer as the lawyer who knows best are solid too.  And the shift in tone towards the end… well, you’re going to want to experience it for yourself.