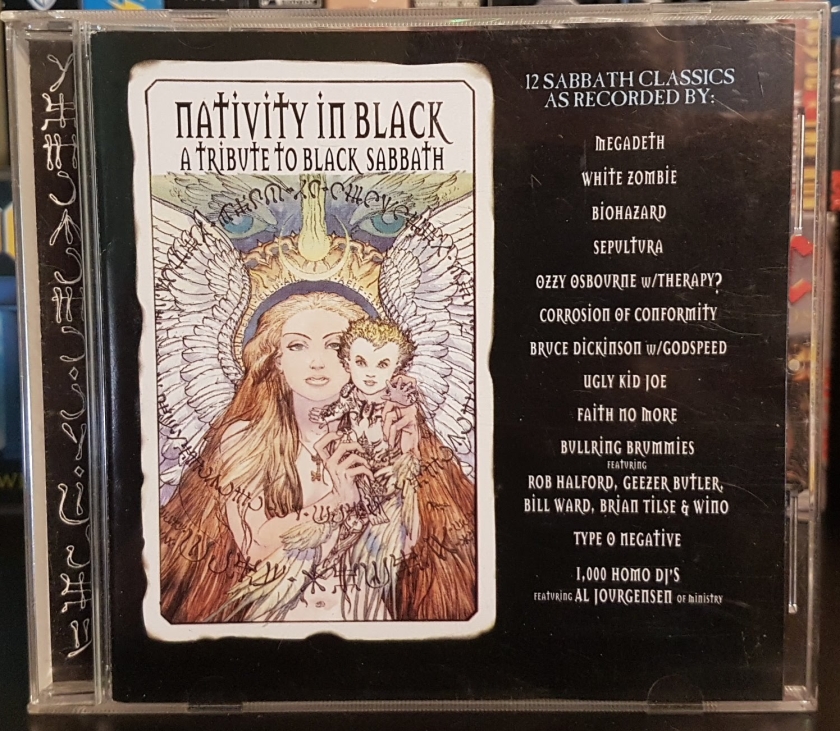 Welcome to the first in my new series, Major Scores!   I’ve already set things up right here, so read that short post if you need to because I’m diving right in!

Plenty of bands overlapped Frank and I’s taste in music (Very little didn’t. I was more the AC/DC and Van Halen fan, while he could tolerate some grunge bands like Pearl Jam), but none did better than Black Sabbath.  They were at the top of our most-wanted lists despite us both hearing very little from them.

All I had was a recording of their 3rd album Master of Reality my Dad recorded onto the crappiest/cheapest brand of cassette Maxell had to offer from his original 8-track.  (I wish I had kept that recording.  I believe its crappiness helped add to the creepiness of that first listen.)  Frank had Sabbath’s 2nd album, Paranoid on CD.  (We got a huge kick out of the cover!)

We were out on one of our hunts for used CDs when we found Nativity In Black – A Tribute to Black Sabbath.  We both couldn’t believe someone would trade this in! It had just come out maybe a month or two prior and was priced well over $25 at Sam’s or A&A.  And here it was for 10 or 15 bucks!

Nativity in Black covers the classic Black Sabbath material from the Ozzy Osbourne era, mostly by heavy metal bands.  The title comes from a Sabbath tune from their first album called “N.I.B.” which supposedly refers to a Black Nativity.  If you ask any of the band members though, they’ll tell you it was in reference to drummer Bill Ward’s pointy beard which they nicknamed “nib”.

NiB was a major score for us since it would allow us to spin a few Sabbath tunes we had not heard yet while discovering some bands.  We figured it was some “old dude” who traded it in.  He probably loved the originals and couldn’t stand the covers.

I allowed Frank to pick up the CD since he found it or had a bit more expendable cash than I did… it was one of those two things, I’m sure.  Anyway, we did find a few other albums that day but NiB was given priority and the first album we spun as soon as we got to Frank’s.  We instantly loved… most of it.  Shortly after, I did find my own copy which I still have.  Although these tunes are ingrained into my memory, it has been a long time since I’ve listened to them.  I guess I’m now the “old dude” who sticks to the originals.

I gave NiB a spin for this write-up, so here is what I think/thought of the covers and which bands I ended up becoming a fan of.  Hate to say it but… some of which I  didn’t realize who they were until now!

“After Forever” (originally on Master of Reality)
by Biohazard

Biohazard was a rap/metal band.  Kind of a pre-curser to Nu-Metal, but much better than that.  Their take on this tune is a bit douchey, especially the “improvised” into:

“Yo, this is Biohazard, from Brooklyn, New York,
Droppin’ some respect for the almighty Black Sabbath,
Ninty FOUR!  Mother Fuuuuuuccccckkkkaaaaaa!

lol, so bad.  But it is forgiven since they are extremely complementary to Sabbath and this version does faithfully rock.  I did buy one Biohazard CD at some point (I think it had an orange jewel case) based on their tune here, but none of stuck with me.  I traded it in or gave it away at some point.  B

White Zombie was shortly to become one of my most listened to bands from this period of time.  Astro-Creep: 2000 – Songs of Love, Destruction And Other Synthetic Delusions of the Electric Head Astro-Creep was about to be released in the spring of ’95 and would become the album of the summer for me.   This probably wasn’t the first time I heard them.  I believe “Thunderkiss ’65” from their ’92 album La-Sexoristo was floating around often enough.  But this was definitely the beginning of when I would heavily get into them.  Frank and I did see them at Copps Coliseum in the Hammer with Pantera in the summer of ’96.  (A story for another post.) A+

“Paranoid” (originally on Paranoid)
by Megadeth

I thought this rocked then and I still do now!  At the time Megadeth was probably the most recognizable metal band that wasn’t named Metallica (At least in my circle of the world).  People cooled heavily on them after Countdown to Extinction and the initial hype for Youthanasia fizzled out.  NiB came out right between those two mammoth (For the time, anyway) releases.

Their straight forward take on Sabbath’s most well-known tune does it justice and the fun ending is the icing on the cake.  (Listen to it for yourself!  My explanation would only ruin it.)  This earned Megadeth a Grammy nomination in 1995 for ‘Best Metal Performance’.  A, A+ with the ending

1,000 Homo DJs is a band I had never heard from again…. and geez, that name isn’t exactly PC by today’s standards.  Unless they mean homo sapiens.  If so, it is just a weird attention grabber.

I had no idea how they are actually a side project for industrial music pioneers Ministry until I looked them up for this post.  I thought Al Jourgensen from Ministry was collaborating with them.  If you look at the wording on the cover, you could see how I thought this.  This was the first time I heard any version “Supernaut” and I liked it then.  Now, with the original to compare it to, I still like it.  Fits the time, not a bad at all.  As for Ministry, I really only like this and their Psalms69 album.  B+

“Iron Man” (originally on Paranoid)
by Ozzy Osbourne with Therapy?

I never did follow up on Therapy? since this cover didn’t impress me.  The backing vocals are weak and the first lead solo is a repeated bending of one string, while the second solo is skipped.  They just hammer on the chords instead.  Even though the cover is solid enough; I believe most of it has to do with Ozzy’s involvement.  It’s fine but just fine.  B-

Oh yeah, this was my gateway drug to the sludgy groove of “COC”.  At least the albums with Pepper Keenan.  “Lord of This World” was the perfect tune for them to cover since their style derives from Sabbath tunes like “Lord of This World”.  As of today, my collection is only missing one COC+Pepper album.  A++

“Symptom of the Universe” originally on Sabotage
by Sepultura

This was my first time hearing “Symptom” and wow, I fell in love with this tune.  I have mad respect for Sepultura and their excellent job with covering one of Sabbath’s heaviest tunes.  The way they handled the song’s Latin grooved second half was brilliant.  It fit their style while being faithful to the original.  I did try out one of their more popular albums, Chaos A.D. at some point but the vocal styling wasn’t really for me.  I am a fan of their work here, however.  A+

“The Wizard” (originally on Black Sabbath)
by Bullring Brummies

So, I type in Bullring Brummies into google asking “Where did these guys go?”  They introduced me to “The Wizard” and I never heard from them again.  Well, I had to do a double-take at the CD’s cover when reading their wiki page.  At the time I had no idea who Rob Halford was and didn’t know he was on lead vocals until right now.  In my defense, he hides his melodic tone behind some mighty distortion.  A bit of a trend for the time.

This album had a direct effect on the band!  Love it!  Anyway, like 1,000 Homo DJs I thought Bullring Brummies was a band who Geezer and Ward were collaborating with.  Well, this is a solid take on “The Wizard” considering only half of this band is “covering” Sabbath.  Too bad how it is unlikely that the Bullring Brummies will ever record again.  It probably would have earned an A+ from me if Halford sang like Halford. A-

Whole-Lee-Cow!  OK, let me get Godspeed out of the way before I gush over Dickinson.  I never follow up on them until now.  Apparently, they formed in the early ’90s, went on two high profile tours opening for Sabbath and Dio to support one album called Ride.  They then broke up shortly after, and until recently (within the last five years) reunited.  I gave Ride a spin on Spotify and its pretty good.  It gets a little filler-y towards the end, but I dig the groove.  Adding to my CD wishlist.  Their ringleader Chris Kosnik started another band called The Atomic Bitchwax.  Wow, I love that name.  A lot to follow up on here!

As for Bruce, this was the first time I heard what I consider to be the best voice in metal, period.  I was still a couple of years away from a rocky introduction to Iron Maiden (another story for another time) but I was immediately a fan of Bruce’s voice here.  This might be the best song on the album.  If you plan on only listening to one tune from this album, make this the one! A+++

UKJ can come off really douchey at times, but they can be charming while doing it.  They’re almost a parody of an ’80s sunset strip hairband.  Their biggest song “Everything About You” was already all over the place (including Wayne’s World) and I’m positive I had their first LP, America’s Least Wanted already.  Their cover of N.I.B. is OK.  Probably the best they could do.  They lose points from me by ignoring the Geezer Bulter classic “Bassically” intro.  The song just isn’t the same without it.  C+

“War Pigs (Live)” (originally on Paranoid)
by Faith No More

I know people love them but I could never get into this band.  We certainly started off on the wrong foot with this embarrassing cover of “War Pigs”.  I thought it was terrible then and still do today.  They rush through the heavier parts (NOT play it faster, rush through it!) while the lead singer “blah, blah, blahs” his way through the lyrics.  There is NO respect for the song.  Apparently, this was lifted from one of their live albums as “War Pigs” was a regular in their setlists.  I don’t know, sounds to me like they have never even heard of the song before, let alone played it.  F—–

I respect Type O ‘s cover.  They showed up.  Covered the song in their style without taking any shortcuts.  Both UKJ and Faith No More should copy their notes.  With that said, nothing about it does anything for me.  It’s just not my jam.  So much so, I recuse myself from giving it a score with respect. NA

There is a Nativity in Black II that came out in 2000.  I didn’t get into it then, but I did give it a listen on YouTube just now (there is no official or complete version of Spotify).  I don’t know why I previously passed on it because most of it is decent. Since they are asking an arm and leg for it on eBay and Discogs, I’ll have to keep an eye out for it at the thrifts.  Added to the CD wishlist.