Way back in my college days I was chatting with a buddy of mine who was a fan of the heavier side of Rock ‘n Roll.  Kiss, Motley Crüe and G’NR in particular.  I asked him about AC/DC and he said he liked them but they were overplayed.  So, I said… what about Flick of the Switch?  He had never heard it.  I grabbed my Flick CD and played it on down for him.  He was not impressed.

He couldn’t tell me exactly why he didn’t care for it, but he did say something was missing.  He then told me that he believes Kiss’ Star Spangled Banner on Kiss Alive III was better than Hendrix’s from Woodstock.  That’s when I farted and walked out of the room.  True story.

Flick is AC/DC’s follow up to the great, but overproduced, For Those About To Rock (We Salute You).  This time AC/DC decided to get as far away from a commercial sound as possible.  With only the help of engineer Tony Platt, the band produced the album themselves with the goal to bring the feel of their live performance into the studio.

They quickly hammered out all ten tunes within a month, with vocals being the only bump in the road.  The band’s previous producer, George Young, came in to help.  He ended up having Brian Johnson record them all a second time.

As much as I disagreed with my friend, it seemed that most agreed with him.  With AC/DC being at their commercial peak in 1983, Flick should have sold extremely well, but it did not.  Instead, it became their poorest selling album since Powerage.  A lack of studio polish might be the reason, but there very little attention was paid marketing as well.  The album lacks a single for the radio and they taped some rehearsals for videos to show on MTV.

Well, as far as I’m concerned, you people missed out.

Flick of the Switch is amaze-balls.  I love the boozy Bon years as much as the next guy, but I like Brain too.  Flick is loaded with his personality making it not only the most “Brian” album ever, but also the band’s heaviest.  It is raw,  direct, and angry.   It follows the thread of an angry groove that is raising a huge middle finger to the trends of synths and drum pads of the early ’80s. 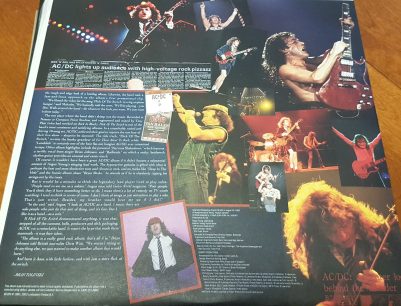 Guns for Hire is the best tune on it.  I love Angus’ intro.  AC/DC used it to open all of their supporting shows for this album.  Too bad they don’t play it any longer.  Bedlam in Belgium spins a yarn about a real life event that involves a scuffle between the Belgium police and their fans at a show they did in the late ’70s.  It’s about a real as AC/DC can get.

Flick of the Switch is great with its walk up riff.  Badlands has a really nice groove and Brainshake may be the band’s most frantic song.  It is either about taking a fast car for a joy ride or rough sex.  Either way, an appropriate for AC/DC.

A big F.U. to the religious zealots who were labeling AC/DC as Satanists because some of their songs reference hell.

Flick of the Switch might not be AC/DC’s strongest, but is the “Black in Black” lineup at their most purist.  I can just watch these guys rehearse these tunes, over and over again.  And I have:

Don’t just take my word for it.  Blogger for the Bold, Super Dekes laid it down perfectly in his review of Flick when he said: “Opener Rising Power took me all of 10 seconds to realize that this was cranky DC street rock.  A no-nonsense approach to the songs…”  I couldn’t agree more.  And that’s why I love this album.

Well, it looks like I'm in the #strippersunion now. Local 518. #thetragicallyhip🇨🇦 #theodds
Chicken, a little onion, and peppers. 😋 #pizza
My #KingsX box set came in today! First 5 albums! I have @mikeladano @arenarocktbay and #martinpopoff to blame.
Finally, the re-re-release of Vol 4 is here! #blacksabbath #ozzy #ozzyosbourne
A little hike on the #halltract today. No bugs in the winter!
Newly arrived.