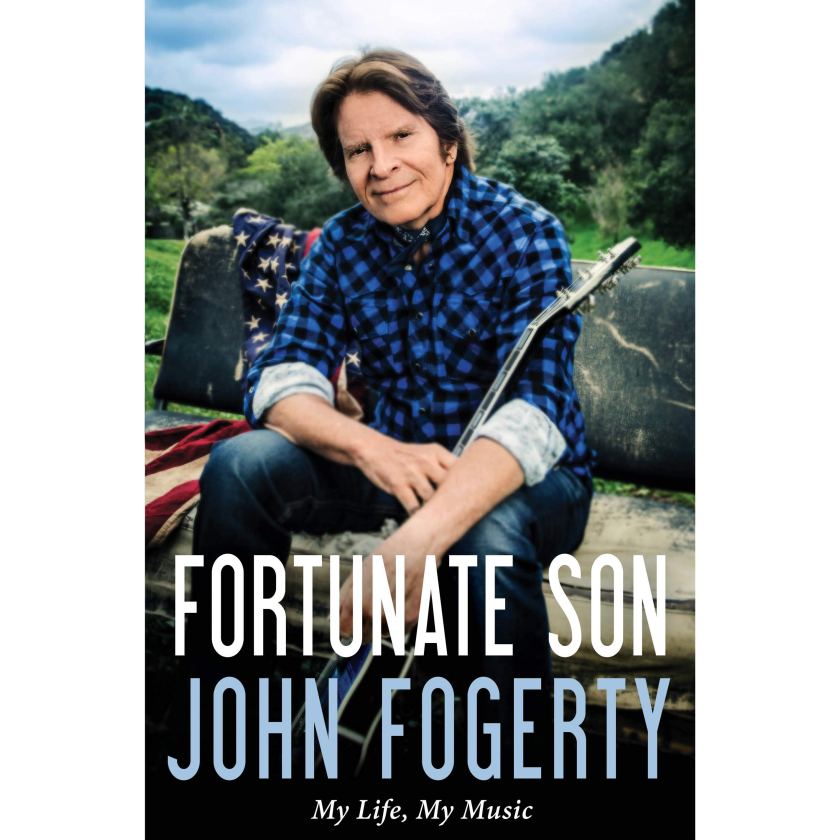 Fortunate Son: My Life, My Music by John Fogerty was published in 2012 and I finally got around reading it this month.  I was able to snag an ebook copy from my local library and put it onto my Kobo Reader without having to leave the couch.  What an age we live in!

What attracted me to Fogerty’s story (besides being a huge Creedence Clearwater Revival fan since I was a teen) was all that in fighting!  I knew CCR had a ton of hits in its short period of time, (3 albums loaded with top 40 hits in 1969 alone!) and then they were done as quickly as they started.  John was CCR’s singer, song writer, and lead guitarist, who no longer acquainted himself with any of his former band members.  And I’ve always wondered what went on there.

Well dang, I found out!  I mean, the story is all from John’s perspective so take it with a grain of salt.  But there is no denying how after CCR, John went on to have an amazing professional career, winning Grammys and performing with professional classic rock royalty like Bruce Springsteen, George Harrison, Bob Dylan, Eric Clapton, Billy Gibbons, etc.  Meanwhile, the rest of the band pops up on the “old fart” circuit performing at casinos and smaller venues as Creedence Clearwater Revisited. So, it is clear to me where the talent lies.

Not only does John throw all of his former band mates under the bus, he then takes the bus to the local gas station, fills ‘er up, checks the tire pressure, and heads back for more.  And after reading his story, I can see why.  Between the years of 1968 to 1970 CCR was the #2 best-selling rock band in the world with The Beatles holding the #1 slot.  You would think this amount of success would have Fogerty financially set for life.  But early in their career the band signed a recording contract slanted heavily towards the label, Fantasy.  This contract would see the first 180 songs CCR would produce committed to the label.  This poor business decision would not only eroded John’ relationship with his band members including his brother/rhythm guitarist Tom Fogerty, it would also see him lose control of CCR’s music.

The band made a pact to put all decisions on licencing their music to covering artists, commercials, TV Shows, or films, etc. to a vote.  Shortly after the band breaks up in 1971, Fantasy purchases Tom Fogerty’s vote and frees him from his part of the 180 song debt.  Bassist Stu Cook and drummer Doug Clifford follow shortly after.  This means that not only is the remainder of the 180 song debt placed solely on John’s shoulders, but he will be out voted on any licencing decision by Fantasy 3 to 1.

The CCR tune you heard in “Forrest Gump”?  Fantasy’s decision.  ‘Fortunate Son’ used to hock denim in a Wrangler TV spot?  John had no say in the matter and he hated the ad.

John confronts Tom one day and asks him how he could sell out his music like that.  Tom replies with “I just wanted the money.”

John begins whittling down now his 180 song debt with his first solo project in 1973, Blue Ridge Rangers.  The album is a compilation of 12 traditional and country covers with every instrument played by John; and with just a hint of passive aggression John decides to leave his name off of the cover sleeve (This was changed on the vinyl re-issues and the CD).   It was a commercial flop with a majority of the public led to believe that is was a new country album by a group called “Blue Ridge Rangers”.  John doesn’t mind as his purpose is to be free of the 180 song debt and get back to writing for himself.  Fantasy has the last laugh, however, by informing him that the album will not count.  His debt is not simply any 180 songs, but 180 “rock songs”.

John also had to regularly fight for his cut of the royalty money he was owed as Fantasy would hold onto it for various reasons.  In an early 80’s he filed a lawsuit for a portion of the money owed to him, and he allowed his band mates to join him since each of their lawsuits were filed too late and the statute of limitations had run out.  Not only did He and his band mates win the money owed to them, but John was also awarded freedom from the ridiculous 180 song debt.  John was finally able to write for himself again, but Fantasy wasn’t done yet.

In the mid-80’s John puts out his first “debt-free” solo album, Centerfield, and it is a smash hit.  Fantasy then sues John for plagiarizing CCR.  Da faq you say?  Yep.  Despite John being the sole author of both tunes they claim the album’s first single ‘The Old Man Down the Road’ is a ripoff of CCR’s ‘Born on the Bayou’.  They were suing John for plagiarizing himself!  During the trial it is reviled how Fantasy was put up to this ridiculous claim by his former band members.  They are the ones who convinced the label that John was restructuring old CCR songs.  This was AFTER John had allowed them in on the previous lawsuit against Fantasy.  They only want that money, man.

Besides spending way too much time in court and money on lawyers, Fortunate Son does offer John’s insight into many of the tunes he famously wrote.  He also gives shout outs to the songs that he grew up listening too which helped shape his music and guitar tone.  I was making notes throughout my read and now have a killer song list on Spotify titled “John’s Recommendations and Influences”.

I loved getting John’ perspective on not only his music, but life and how he (when he was able too) chose to live it.  The book goes off on tangents once in a while as John talks about his relationship with his current wife, and it even switches to her perspective at times.  It’s fine… but I was here for the dirt!  So, I mostly skipped it.

You won’t find much of the debauchery and drug abuse that follow most rock ‘n roll bands here.  According to John, one CCR member would pour shaving foam into the backs of hotel television sets to watch them blow up, and that is about as mischievous as the book gets.  But if you are into vendettas and lawsuits, you’ll get plenty of that here.  John is an interesting guy and I only gave you a taste here of what the book has to offer.  Highly recommended.