“What did you say your name was?”
Fletch stars Chevy Chase as Los Angeles Times reporter Irwin “Fletch” Fletcher who is investigating a drug trafficking operation on the beaches of L.A.  While undercover as a junkie, Fletch is approached by Alan Stanwyk (Tim Matheson), the vice president of Boyd Aviation.  Believing Fletch is a junkie, Stanwyk offers him $50, 000 and a solid get away plan to Rio De Janeiro if he agrees to kill him in a few days time.  Stanwyk claims to have been diagnosed with terminal bone cancer and he wishes to die before the physical agony sets in.  He needs to make it appear that he has been murdered since a suicide or accidental death would leave his family out from millions in life insurance money.

Fletch smells a rat, but reluctantly agrees to the deal.  With the help of a colleague at the paper, Larry (Geena Davis), he begins investigating Stanwyk.  Fletch goes undercover as a Doctor, insurance agent, aviation mechanic, and many others disguises to learn Stanwyk’s real reason behind his offer.

Fletch is one of my all-time favourite films as it is the perfect vehicle for Chase’s brand of sharp quips and jabs mixed with slapstick humor.  The character does share some similarities with Chase’s better known character, Clark Griswold from the Vacation series of movies, but Fletch is way more slick than dorky.  More arrogant by far, but still charming enough that you’d still want to have a beer with him.

Chase’s performance is the window dressing for a compelling thriller that has a few twists and turns that will keep you on your toes;  not so much if Fletch will get screwed over in this deal, but more of how bad and why.  It is not surprising the story is as good as it is considering it is adapted from the book with the same title penned by Gregory Mcdonald.  (Which I highly recommend.  In fact, I highly recommend all but two of the eleven books he wrote based on the character.  Good times.)

Director Michael Ritchie keeps the film well-paced as Fletch continuously changes his appearance, comes up with silly names on the spot for the parts he is playing, while staying ahead of the police, his editor at the paper, and his ex-wife’s lawyer.  Outside of a car chase that is fun, but somewhat unnecessary, Fletch’s perfect balance of action and comedy, solid performances by the main cast, and a faithful adaptation of one of Mcdonald’s best thrillers all makes for a perfect movie. 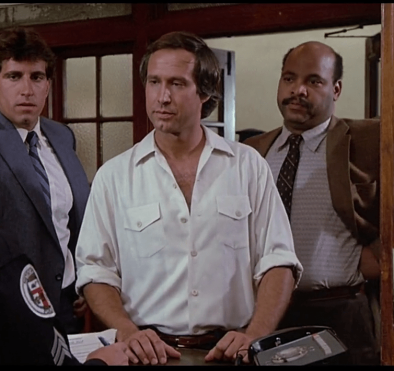 Geena Davis towered over everyone in A League of Their Own, and James Avery (aka Uncle Phil) was taller than everyone in The Fresh Prince of Bell Air.  Chevy Chase can keep up with them both!

Fletch is quite the character so he is going to need quite the car to go along with him.  His white 1972 Buick Riviera with a shredded soft roof is perfect to remain low-key while sleuthing.

Movie studios in the 80s knew not having a killer soundtrack to go along with your film was leaving money on the table and I love the assignment of Harold Faltermeyer of ‘Axel F’ fame to score Fletch.  His brilliant tunes like ‘Fletch Theme’ and ‘Diggin’ In’ play while Fletch is in trouble to set the right serious, but not anxious tone.

He also produced (sung by Stephanie Mills) ‘Bit By Bit (Theme From ‘”Fletch”)’ which should have been as big a hit as ‘Ghostbusters’ or ‘Take My Breath Away’, but alas, it was not meant to be.  Probably why as of writing this, Fletch – Music for the Motion Picture Soundtrack has yet to see an official release on any platform outside of its original run on LP and cassette in 1985.  Damn shame.

This is not a sexy looking or sounding Blu-ray.  The film has been transferred from the 2008 HD DVD released without any touch ups.  The tone for the overall image is flat and there is a ton of film grain for the bright, outdoor scenes.  There isn’t much to the 5.1 DTS-HD audio mix either with only a few peeps from the rear speakers here and there.

Pitiful.  The features here are also a transplant from HD DVD release… and they are in SD!  Making and Remembering Fletch is a terribly unfunny 27 minute reflection piece made by some people you have never heard of.  They eventually segue to questions with some of the film’s lead actors (No Chase or Davis, of course).  The Disguises, is a decent 6 minute interview with makeup artist Ken Chase, and Famous Moments is a 3 minute montage of lines from the film you just watched.  See if you favourite moment made it!… dumb. Fletch is a solid comedy that you should catch if you never have before.  Stream it, record it off of TV, track down the HD DVD, do whatever you have to do to get this movie in you… and I’ll even begrudgingly suggest picking up this Blu-ray too.  It’s not a great print of the film, but it also isn’t a horrible way to enjoy it for $5-$10.  Yeah, Fletch is excellent enough to deserve a proper HD visual and audio boost from a remaster with some extras involving Chevy himself, but it needs to be watched while we wait for that to happen!

Well, it looks like I'm in the #strippersunion now. Local 518. #thetragicallyhip🇨🇦 #theodds
Chicken, a little onion, and peppers. 😋 #pizza
My #KingsX box set came in today! First 5 albums! I have @mikeladano @arenarocktbay and #martinpopoff to blame.
Finally, the re-re-release of Vol 4 is here! #blacksabbath #ozzy #ozzyosbourne
A little hike on the #halltract today. No bugs in the winter!
Newly arrived.