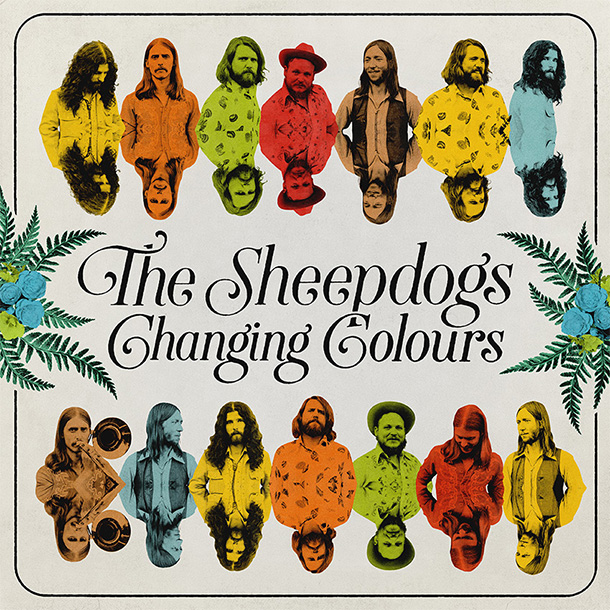 The Sheepdogs have been a group that I have respected and enjoyed for some time but never REALLY got into.  That all changed after my first sampling of their latest album, Changing Colours.  I loved its late 60’s/70’s boogie rock vibe and made my way to grabbing a copy as soon as I could.  The album clocks in at almost 50 minutes with a whopping 17 tracks!  Well… a few of those are short instrumentals to showcase the band’s mad-handling of their instruments, including new lead guitarist Jimmy Bowskill. Bowskill has floated around the Canadian Blues scene for almost a decade now and he is a tremendous get for this band.

The Sheepdogs were a bit of a one man show before with lead singer/guitarist Ewan Currie handling all of song writing (and he still does the heavy lifting on this album), but Bowskill co-wrote the short instrumentals.  They work to bridge the songs together;  some are blues-y, some are bluegrass-y, but it’s all great rock ‘n roll.

The driving boogie rock of ‘Nobody‘ kicks off the album with Ewan’s lyrics about a young person’s determination.  Ewan and Bowskill’s double guitar work which will be featured a lot on this album, so I hope you’re a fan of The Allman Bros Band!  I’m a sucker for some solid slide guitar too, and Bowskill’s solo delivers in this one.  Check out the video and its nod to a classic scene from The Blues Brothers:

‘I’ve Got a Hole Where My Heart Should Be‘ is the album’s first single (A least here in Canada).  A solid 70’s riff rock groove with some excellent keyboard work by Shamus Currie on the hammond organ.  It is finished off with a few strummed chords before the party rock groove of ‘Saturday Night‘ takes off; featuring some excellent guitar work from Bowskill.

Bowskill breaks out the pedal steel guitar for ‘Let It Roll’ and suddenly I’m on the farm.  Shamus’ keys are a highlight here too.  ‘The Big Nowhere‘ has a strong Santana vibe that I absolutely dig.  The chorus repeats:

You’ve got to remember
or you’re bound to lose

Tell me that doesn’t fit on a Santana album.

‘I Ain’t Cool’ sounds like if Chicago’s trumpet section rubbed up against The Guess Who, and ‘You Got to Be a Man‘ is a good tune with a rolling rock groove.  ‘Cool Down’ is another with a slow Santana vibe which blends seamlessly with the rockin’ instrumental ‘Kiss the Brass Ring‘.  These two should probably be one tune but gotta split up them tunes for the royalty checks, y’all!  They even tie them together when they play them live:

Gorgeous tune.  My man crush for Jimmy Bowskill hasn’t gone too far until I start wearing flowered shirts with a cowboy hat.

‘Cherries Jubilee‘ is a nice little double guitar number with a catchy chorus.   ‘I’m Just Waiting for My Time‘s opening reminds me of The Moody Blues before moving towards a Pink Floyd type of deal.  More great guitar work here by Bowskill.

The bluegrass vibe of ‘Born a Restless Man‘ / ‘The Balieboro Turnaround‘ are next.  ‘Restless Man’ features some harmonizing vocals and Bowskill’s banjo work before he switches to the pedal steel for the instrumental Balieboro.  I’ve been humming this one around the house a lot lately.

My dream is that every Canadian from Vancouver Island to Cape Code will be cranking ‘Up in Canada‘ / ‘H.M.S Buffalo‘ during their long car drives this summer long.  Maybe Canadian radio will pick up on it one day.

The two and a half minute doubling guitar instrumental of ‘Espirit des corps‘ finishes with the sounds of a Canadian campfire in the bush before one the album’s best, ‘Run Baby Run‘ wraps it up.  This tune sounds like the Pet Sounds era Beach Boys dragged Greg and Duane Allman into the studio for a collaboration.  The song concludes with one more chorus from ‘Restless Man’ to tie the last half of the album together.  Nicely done.

Changing Colours is a pure joy to listen to all the way through.  The connection is strong with all of influences I mentioned, and you will hear more with every listen.  With The Sheepdogs pouring their own flavour into every song, they deliver something fresh in with the old.  This is my cup ‘o tea.