I work in the news media and yesterday was a crazy day.  On top of the Las Vegas terror attack, “trusted” news sources rushed to be the first report on Tom Petty’s death.  Although Tom wasn’t in good shape… at all, the initial reports were false.  His daughter lashed out at Rolling Stone magazine last night on social media for jumping the gun, but really (to loosely quote Jack Nicholson’s Joker) the whole damn system needs an enema.  What a world we live in.

Unfortunately, the news did eventually become true.  Tom had suffered a cardiac arrest on Monday morning was gone by late last evening.

I appreciated the many blogs I read yesterday from people who shared their thoughts and feelings about Tom and his music.  Reading how he had touched their lives helped me process his untimely death.  So, I thought I’d do some sharing too.  It is what we do when we are hurting.

I wasn’t always a fan of Tom Petty.  I loved the Travelin’ Wilburys tunes when they came out but I really didn’t know who he was.  To me he was just some guy singing back up to Roy Orbison.  A year later, I was in grade nine when Full Moon Fever came out and I still wasn’t won over.  Our high school cafeteria had a jukebox where we could play tunes for a quarter each and this one girl made sure to bring in enough to play “Free Fallin'” every day, three or four times over.  EVERY day.  Monday through Friday.  She must have been popular or her dad was in the mafia because no one was brave enough to stop her.  Let me tell ya, 40-year-old Mars would not put up with that.

At that point I written off Petty as the “Free Fallin'” guy.  “I Won’t Back Down” and “Learning to Fly” were radio staples but the tunes were not able to penetrate my learned hate for “Free Fallin'”.  Plus, I was one of those kids who ONLY listened to metal.  And as far as I knew, Tom was not metal.

It was a couple of years later when I heard “Mary Jane’s Last Dance” on the radio (a then new track from his Greatest Hits album) and it hooked me.  Suddenly my cold, black metal heart thawed and I was won over.  I ran out the following weekend to pick up his Greatest Hits CD (I still have it!) and I gave “Mary Jane” a few spins when I got home.  After I got the tune out of my system I cautiously gave the rest of the CD a chance and I was floored.  Every song (except “Don’t Come Around Here No More”) spoke to me on some level.  I was able to enjoy “Free Fallin'” now that the daily barrage was years in the past…  I had no idea “Refugee” was his tune….  “I Won’t Back Down” is not metal, but those kick ass lyrics sure are!

In the following years Full Moon Fever, Into The Great Wide Open, and Wildflowers were added to the collection.  I bought the soundtrack for She’s the One the day it came out.  I still have not seen the movie… or even care too.

I regret never seeing Tom perform live.  I guess let the clock run out on my opportunities.  (I am making it my mission to have that not happen with Neil Young and John Fogerty.)

One cool thing I did learn from my used copy of Into The Great Wide Open was how to keep my ticket stubs with the album the concert was promoting. 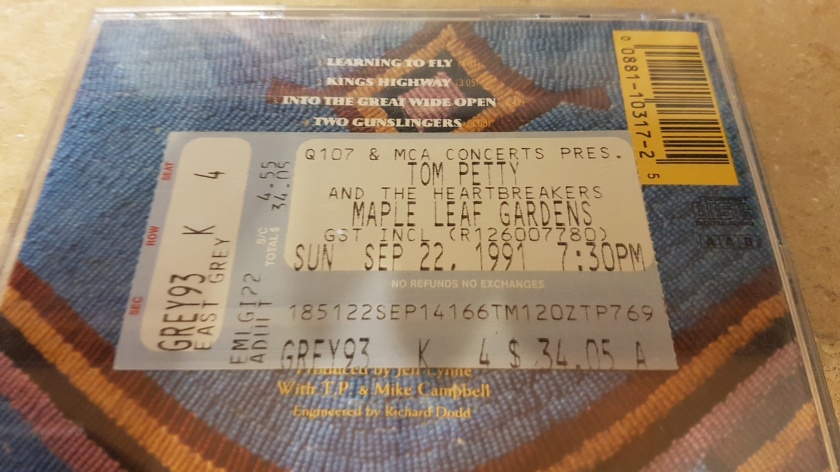 Yeah, I wish I could say I was at that show, but it was most likely the person who owned this CD before I did that got to go.  Still, great way to store you ticket stubs.  Difficult to lose and you’ll always know where to find them!

One final thought, When I bought my acoustic guitar “Yer so Bad” and “Learning to Fly” were a couple of the first songs I learned to play.   “Learning to Fly” is a perfect tune for new guitarists.  It has only four chords, F, C, Am, & G, repeated through out with plenty to time to strum between the changes.  This was instrumental in helping me get the those open chords down pat.  I always wondered if he purposely made that one easy to play so we budding guitarist could learn to fly.