Good, but safe. That was what was the impression I was left with after watching Guardians of the Galaxy for the first time.  The hype train was at full steam when I watched it and I was slightly let down by how it kept my socks on my feet.  Well, now that the hype has simmered down perhaps I can take in what this film is instead of what it is supposed to be. 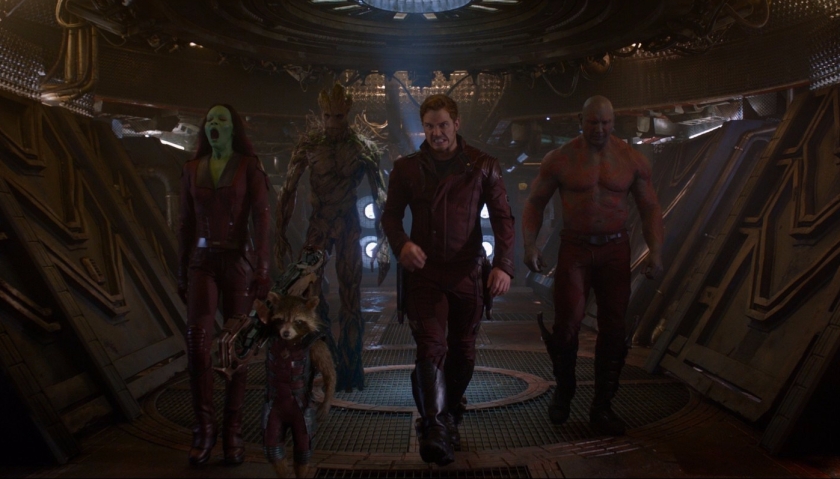 “They got my dick message!”
Guardians begins in 1988 on Earth where a young Peter Quill (Chris Pratt) witnesses his mother succumbing to brain cancer.  After storming out of the hospital he is abducted from Earth by a group of space pirates.

The film jumps forward 26 years to present day where adult Peter is now a full-fledged thief who works for the space pirates and goes by the name of Star-Lord.  The pirates’ leader, Yondu (Michael Rooker), assigns him to steal a powerful orb from the planet Morag.  After finding the orb, Peter barely escapes an attack by some subordinates of the powerful villian, Ronan the Accuser (Lee Pace).  Peter barely escapes and discovers how desired the orb is.

After Peter decides to go rogue with plans to sell the orb to keep the profits for himself, Yondu issues a bounty on him and Ronan sends the assassin, Gamora (Zoe Saldana) in pursuit.  Gamora finds Peter attempting to sell the orb on the planet Xandar and nearly snatches it from him.  She is interrupted by a pair of bounty hunters, Rocket, a genetically altered raccoon (voiced by Bradley Cooper), and a walking tree-like being Groot (Vin Diesel), who attempt to collect on Peter’s bounty at the same time.

The scene leads to an altercation where all four captured by Xandar law enforcement and are sentenced to prison.  While in prison, they meet with another inmate, a strong alien, Drax (Dave Bautista), who is driven by the revenge he vowed on Ronan for killing his family.  All five form an unlikely alliance to break out of prison, but once Peter discovers the true power of the orb, he now needs to keep his group of misfits together to save the galaxy!

My biggest issue after watching Guardians the first time was how I expected a more meaty story with deeper characters.  The villains are a little too cut and dry.  Both Ronan, and his boss Thanos (Josh Brolin) are hell-bent on ruling the universe, but you are never told why.  They are bad because they are bad, I guess.  It isn’t explained why the space pirates kidnap Peter of all people (Although they do get to it in the sequel).  Why is the Tree guy so loyal to the mean Raccoon?  The film doesn’t take a second to let you breathe in these characters and as a result they come off a bit flat.

It wouldn’t take a long exposition to give us a hint of some reference as to why these things are happening.  Gamora is at odds with her adoptive sister Nebula (Karen Gillian), and at least there we are shown how Nebula is driven by jealousy.  Thanos mentions how Gamora is his favorite daughter with Nebula present; that one line shows us how the sisters’ tainted relationship goes beyond a simple sibling rivalry.

Watching Guardians this time around following a viewing of the sequel, Guardians of the Galaxy, Vol. 2, allowed me to let my hair down.  With a better understanding of who these characters are and where the series is going I was able to take in Guardians as the fun action film it is.

The casting of Cooper and Diesel to voice animated characters might have been unnecessary (I honestly couldn’t find any reason why their talents were needed for the parts.), and Zoe Saldana’s character is understandably a little stiff as she is mostly given the straight-man job.   It leaves the burden of stealing the show on Chris Pratt and Dave Bautista’s shoulders, and they make it look easy while doing it.

I had no idea who Chris Pratt was before this film and he pulls off a grade-A leading man performance here.  Mixing believable comedy with action is not easy (see Stallone’s comedy films) and Pratt is able carry the two hours with his charm.  I had never heard of Dave Bautista, either.  Many on the internet voiced their disapproval with his casting for the role due to his prior WWE fame, and they could not have been anymore wrong.  He steals every one of his scenes by cramming child like naiveté  into a blood thirsty killer.  It is brilliant.

Haven’t checked out the new show yet.  I hear good things.

Special shout out to Michael Rooker 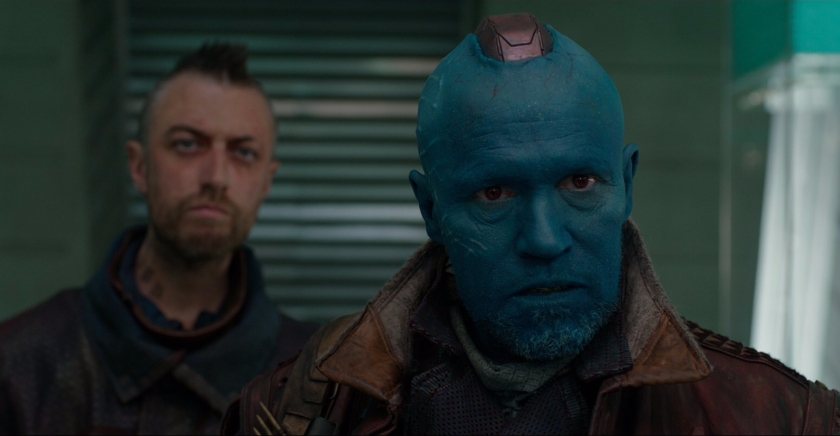 In a film with John C. Reilly, Glenn Close, and Benicio del Toro all playing smaller roles, Michael Rooker is the one who stands out best in his.  Probably best known as Daryl’s brother Merle on The Walking Dead, his performance here is as solid as Pratt or Bautista.  His character tows the line between good and bad while switching between a hard-nosed villain and comic relief.  He is good times in this movie.

This is not as bad as Iron Man 3 but it is kind of meh.  The joke lies with Rocket as he is looking for his next bounty to hunt.  He spots an old man hitting on a younger girl.  The old man is Stan-the-Man.  And that is the joke. 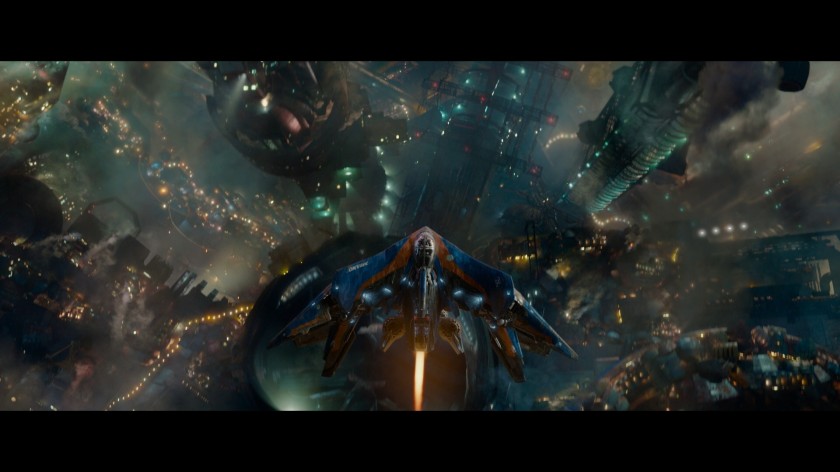 Guardians is a vibrant film with many colours to take in.  Again, like The Avengers, I need to knock a point off since the black levels are slightly crushed.

There is a ton of sound effects, dialogue, and music to mix into Guardians 7.1 DTS-HD mix and it is done perfectly.  The ships zipped by though all of the speakers, the music surrounds you with warm tones (like Star Lord’s Mom made the mix tape with dubs from vinyl records), and the dialogue is present, front and center when the action goes down.  Wonderful-sounding disc.

James Gunn’s audio commentary really dives into the script and gives a scene by scene rundown of the whole film.  The casting, designing the worlds,  the alien technology, and looks of the aliens are all on the table.  He also lets us in on a few easter eggs and gives the film an extra layer that wasn’t there before.  So worth checking out.

The gag reel and deleted scenes are interesting to look at if only to get a peek of the special effects in progress.  A lot of them were incomplete with the CG at different stages and the green screen effect not added in yet.  The gag reel made me smile but there is nothing in the deleted scenes that made me say, “That should have stayed in.”

There are several featurettes but they are all about selling the movie instead of discussing how it was made.  Gunn’s commentary is really where it is at.

While there isn’t much practical effects to praise and my eyes did start to glaze over at the amount of CG flashing by on the screen, Guardians is a well-paced, fun action flick that isn’t afraid to get a little goofy at times.  This is comic book stuff, after all.

The story telling can be a little shallow, (I wonder by how much the Disney executives creamed their jeans during the film’s pitch meeting when they found out how Star Lord is an orphan) but now with the sequel to give us a better frame of reference I can raise it high on my recommendation list.  It truly is good times.

You may notice I have dropped Iron Man a few spots.  My feelings have changed a bit with reflection and all that jazz.