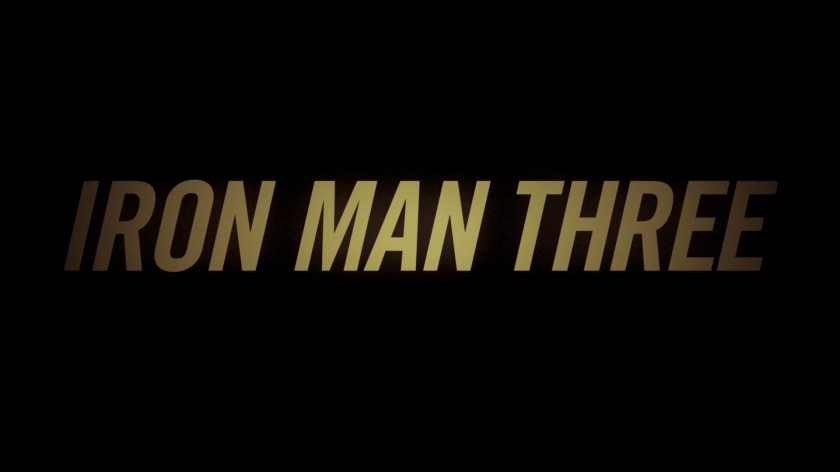 Iron Man 3 kicks off “Phase Two” of the Marvel Cinematic Universe where we build up to yet another Avengers movie.  Mr. Stark is getting his third film while we have yet to see The Guardians, Ant Man, or Dr. Strange make an appearance.  It shows how heavily the MCU relied on the bank the Iron Man films could bring in up to this point. 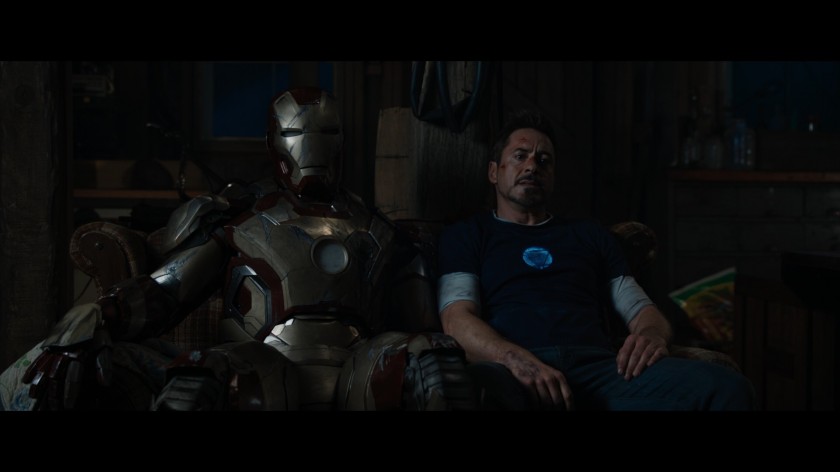 “I’m just a man in a can.”
Tony Stark (Robert Downy, Jr.) is experiencing post traumatic stress after going through a wormhole and reaching the other end of the galaxy at the end of The Avengers.  He attempts to avoid the problem by burying himself in work and perfecting his suit 42 times over.  The result is “Mark 42”, a new design that allows it to zip though the air and build on him one piece at a time.

The work only amplifies his insomnia and frequent panic attacks, however, while a terrorist group lead by a mysterious figure known as The Mandarin (Ben Kingsley) begins to step up its game.  They are steadily increasing the number of attacks on the United States, and due to his current mental state Tony begins to make rash decisions. After Happy (Jon Favreau) is almost killed when following a mysterious visitor to Stark Industries,  Tony calls out the Mandarin who the visitor is linked to.  Tony invites him to meet him at his front door by giving out his address.  The terrorists show up and completely destroy his home; Tony appears to be killed in the attack.

Tony, barely escaping with a severely damaged Mark 42 suit, ends up in a small town in Tennessee.  He decides to remain as “dead” for now until he can repair the suit and locate the Mandarin.  His investigation leads him to a much deeper plot, however, that reaches all the way to The President of the United States!

Iron Man 3 is an OK action film but there was plenty that didn’t sit well with me.  This is the third Iron Man film, and it is the third time Tony is vulnerable as he goes through a personal crisis.  In Iron Man, Tony had to come to terms with the reality of how horrible his life’s work as a weapons monger is.  In Iron Man 2, Tony is dealing with how the arc reactor in his chest was slowly poisoning him.  Iron Man 3‘s crisis is the PTSD Tony is struggling with after his journey into the wormhole at the end of The Avengers.  The premise goes nowhere as it is quickly forgotten about midway through the film. Tony having to “James Bond” his way in Tennessee with no suit would have been enough for him to overcome.  It was as if they only needed to address it because it was teased at the end of The Avengers.

It was hard for me to see past a couple of plot holes too.  The first was how it was way too convenient for Tony to be brought by accident to this small town in Tennessee that survived one of Mandarin’s terror attacks.  At this time Jarvis, The Iron Man suit’s on board AI, is on the fritz.  I kept thinking they would address this with a quick line about how Jarvis might have directed Tony there as the last rational thing the AI did before tapping out. It never happened.

The biggest hole though is how the film makes a point to show how all of Tony’s suits are destroyed during the Mandarin’s attack on his home;  it is even the first shot of the film.  For a large portion of the movie we are left to believe that Tony escaped with only his Mark 42 suit.  He spends most of his time in Tennessee going to great lengths getting it back into working order since it is the last piece of Iron Man left…. except no.  During the film’s final act (this is in the trailer, so not much of a spoiler) Tony enacts some sort of directive that brings these half a dozen suits out from hiding so we can have a big flashy battle between good and evil at the end.  Lame.

A showdown with the Mandarin while Tony is in the broken, rickety Mark 42 would have made for a solid third act.  Instead, we are given an ending that looks nice but doesn’t make a lick of sense.

In the audio commentary writer and director Shane Black describes how he likes to think of a script as a stew.  He gets some good ideas and brings them together with the least amount of connecting scenes possible.  I can see that process at work here.  He has a bunch of ideas (Tony’s PTSD, Pepper in the Iron Man suit, Tony solving a mystery without the Iron Man suit) but he doesn’t connect them well.  Instead ingredients blended together in one pot for a tasty stew, these ideas are cooked separately and served on a cafeteria tray with separate compartments.  It is then up to the viewer to decided if they want to bring the mashed potatoes over to the gravy.

There are a few other nit-picky things like how no one in Tennessee recognizes Tony, or how they try to pass off Miguel Ferrer as a questionable good guy when we all know he ALWAYS plays a bad guy.  Well, lets look at a few good things about the film…

One is the scene which Tony’s house is destroyed.  A huge set was built to drop to one side and give the illusion that the house is falling off a cliff. 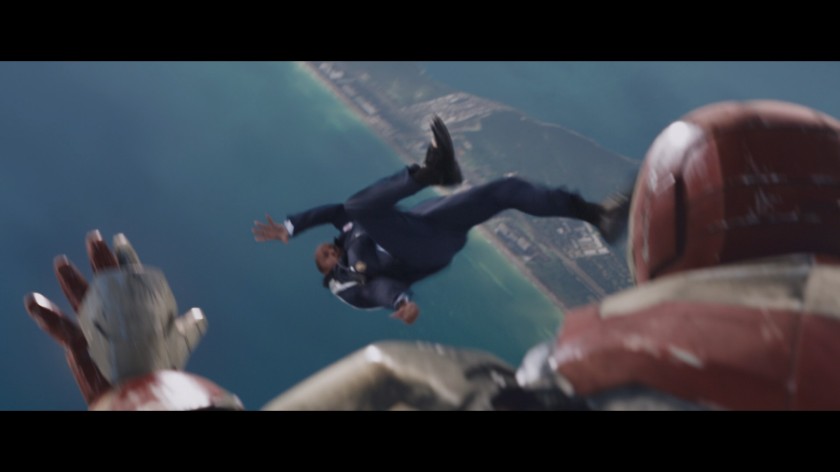 The second is the “Barrel of Monkeys” skydiving scene which is the best part of the film.  It was pulled off with a mix of real stunt actors skydiving and some CG to make it look like they were doing it at a higher altitude.  This could have easily been all done with CG but instead we get a Hanks/Zemeckis level of production that is astonishing to see in an Iron Man film.

I suppose I should mention the “controversy” over the Mandarin’s portrayal (I actually just read two people complaining about it on Twitter the other day).  Without getting spoiler-y, many geeks didn’t care for his depiction in the film.  I never had any attachment to the character, so although I can appreciate how it would be annoying to someone who did, I found the take on the character to be the most enjoyable part of Iron Man 3‘s story.  It was something unique for a comic book movie to have a villain portrayed by an actor at Kingsley’s level.

Tony runs into a kid during his stay in Tennessee.  The film could have taken many clichéd “Tony and the kid” directions, but it instead remains true to Tony’s character.  They can be hammy at times, but it is refreshing when Tony pulls back to his true self and treats the kid like the self-centered jerk he usually is.

The pulled down hat disguise

When I reviewed The Incredible Hulk I said I would keep an eye out for the Marvel “disguise”.  Whenever a Marvel character is incognito the move is to wear a ball cap, like Tony is here while hiding in Tennessee.

This one managed to be a bigger let down than The Avengers.  Stan-the-man is shown for a flash as a judge at a beauty contest.  He holds up a “10”.  Don’t get me wrong, I still like the cameo but it is a 1 when compared to the cameos in the earlier Iron Man films.

Stan was pissed too!  I swear I found this AFTER my review of his cameo.  I was struggling to find the scene on the Blu-ray for the screenshot (I didn’t write down the time) and then searched to see if the internet could help me.  Instead, it lead me to this.  My incompetence pays off again! 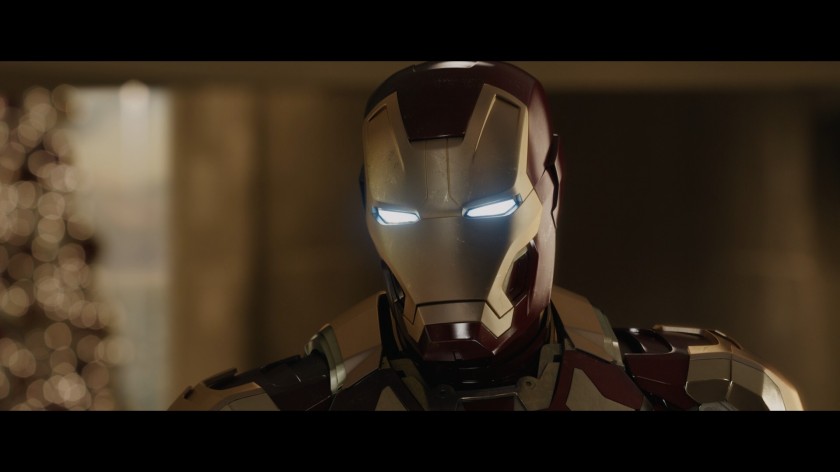 Perhaps it is because this film takes place mostly in the evening and indoors that the limitations of the digital format these films are now shot in isn’t a noticeable.  Or maybe the team learned how to use the new setup better now after their first stab a digital with The Avengers.   Or maybe it is because there is no Whedon to do his Whedon-y thing. Whatever it is, it works in this one.  The film looks great.

The same 7.1 DTS-HD lossless format from The Avengers is carried over to Iron Man 3.  The mix is made with the voice and special effects set as a priority, and every speaker was set to enhance immersion at every appropriate moment.  This is why I Blu-ray. 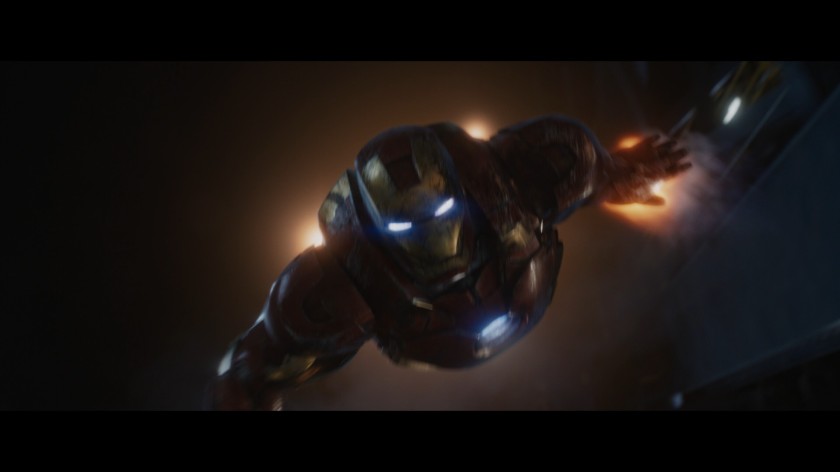 If Iron Man 3 didn’t follow the high bar set by The Avengers and Captain America, I think I would have been a little more than OK with letting the plot holes slide.  Shane Black is a solid action director with a good sense of how to mix practical and CG effects together.  I know he strove to put as many practical elements into the movie as he could.  His disdain for CG is voiced throughout the commentary as he labels the animated parts of the film as “cartoons”.  But his story just didn’t work for me.  At most Iron Man 3 is an OK ride if you’re in the mood to check your brain at the door.  Still…. liked it better than Thor. (Sawee J.!)