When I first announced this project of watching all of the Marvel Cinematic Universe Movies by order of release date, the movie that got THE most hate was not Iron Man 2 (which a lot of people do not like) or Thor (which I do not like), but it was Captain America: The First Avenger.  I was taken aback since I remember both Sarah and I really enjoying this one.  Well, time to see if my memory is playing tricks on me…

“Let’s hear it for Captain America!”
After a short cold opening showing current day members of S.H.I.E.L.D. discovering Captain America frozen deep in the arctic ice, The REAL film begins in 1941 where the US has jumped full-on into Europe’s war effort against Nazi Germany.  Steve Rogers (Chris Evans) who desperately wants to join the fight with his fellow countrymen, has the mental makeup needed to become a great solider but lacks the physical body.

After numerous unsuccessful attempts to fudge his way in,  he catches the eye of a German scientist, Dr. Abraham Erskine (Stanley Tucci), who has defected to the US Army.  He enrolls Rogers in the Army’s experimental “super serum” program which, after injecting him with it, will not only enhance Rogers’ physical abilities to a super human level, but his heart and spirit as well.

With Rogers’ new physical appearance, the US Army first takes him on as a mascot to drive war bond sales and dubs him “Captain America”.  During a visit to Europe to entertain the troops, however, Rogers sees the effect the war is having on the troops and now more than ever wishes to become more active.  With the help of his friends Agent Carter (Hayley Atwell) and Howard Stark (Dominic Cooper), the three team up to fly into enemy territory for a covert operation to take on Hydra, the science division of Hitler’s Nazi army.

It is then that Captain America runs into Johann Schmidt (Hugo Weaving), who prior to his defection, was the first to use Dr. Erskine’s super serum.  Like Rogers, the serum gave Schmidt great physical strength, but also amplified his mean spirit and evil heart.  The early dose also had a side effect of scarring his face red and burning off his nose and ears.  His new physical appearance lead most to dub him “The Red Skull” behind his back. 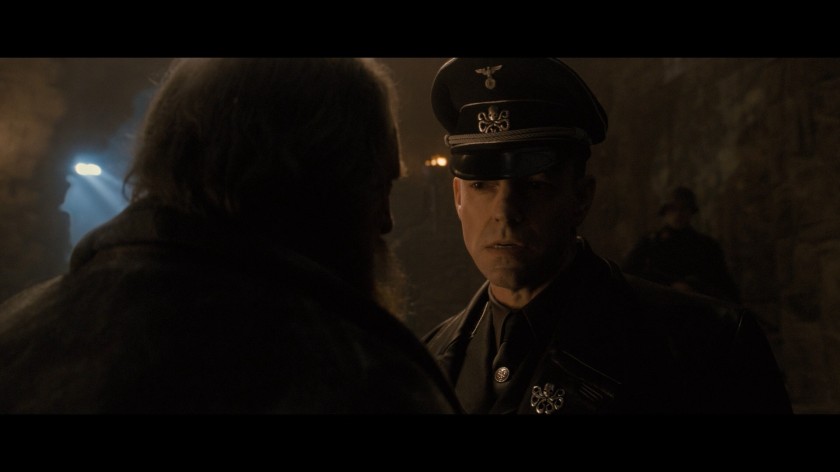 Schmidt recently obtained an ancient device of immense power, and Rogers discovers his plan to destroy the world with it.  It is now up to “Cap” to take on The Red Skull and turn the war to favor the allies for good.

So after this second viewing I still don’t see why some really dislike this film.  It is not a perfect movie by any stretch, but it does have a lot going for it. 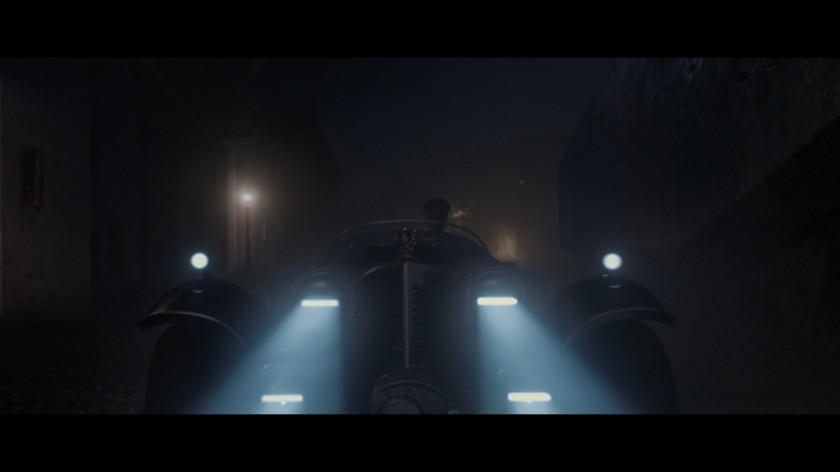 The Red Skull is so far the only legit first-rate villain we have seen in all of these MCU movies.  The way he is introduced in this film, driving up in a mean looking “slit head-lights” Rolls Royce-ish car, was brilliant and it gave me a feeling of unease.  So far every Marvel film has had that moment where the hero takes on a giant CG monster, but The Red Skull is a big enough threat and it was refreshing to see them not dive down that well again.  Heck, this guy would fit in well with Batman’s Rogues Gallery.

Agent Carter is a pretty good character too.  I guess we are getting her origin story here and I know her role is designed to get you revved up for the short-lived ABC show.  But after an awkward introduction where she punches a solider in the face for being insubordinate, she quickly becomes a natural fit as Steve’s ally/love interest.

Director Joe Johnson has legit experience when it comes to action films (The Rocketeer, Jumanji), and he shows off his skills here.  I know there is a lot of special effects in this film, but (“skinny Steve” aside) they didn’t overstay their welcome.  When Rogers is injected with the serum, the majority of his transformation into Captain America is shown from the outside of the chamber he is in.  We are only given some flashes of light through a small window as he is doused with “vita-rays” and a few words and screams of pain from Rogers lets us know something is happening.  The temptation must have been great to have CG upon CG shots of muscles and bones expanding (heh, heh).  Instead, we have shots of the witnesses’ faces with looks of concern and fear.  A much more effective way to deliver suspense to a scene of which we already know the outcome.

Overall I enjoyed the tone and pacing for Captain America: The First Avenger.  Since the first Iron Man, Captain America is a complete story and its bridging to other films/TV Shows feel organic.  Joe Johnson nails the creepy, almost cartoon-ish look of the Hydra/Nazi scenes to the point where I got major Wolfenstein: The New Order vibes from it.  The cast is solid with Stanley Tucci being a highlight because he can’t help but be one in everything he is in.

Hey, it’s the girl from Game of Thrones.

I do watch this show.  Haven’t started this season yet.  No spoilers!

The HBO mini-series Band of Brothers means so much to me, I will always see the actors who played those roles as those guys.  Captain Winters, Malarkey, Nixon, and even Donnie Wahlberg is Sgt. Lipton to me now.  Except for David Schwimmer.  He will always be The Schwim.

I mean, look at this car!

What a way to introduce a villain.

Watching these older cars like this 1939 Buick Special bounce on its shocks as it breaks to a full stop is a treat!  They could barely hold the weight! I can’t help it.  I like cars.

Although Stan the Man had nothing to do with Captain America’s creation, they still give him the honour of a solid cameo.  In the film, there is this ceremony to celebrate Captain America’s recent accomplishments and as he is introduced to the crowd, someone comes out from behind the curtain to break the news that Rogers isn’t coming.  Stan The Man is playing a 4-Star General in the crowd who confuses the person breaking the news as Rogers.  I’ll omit the line here to let you experience it for yourself but it was good enough to get a verbal laugh from me.

Captain America is a competent looking Blu-ray.  It is sightly on the too much film grain side, but the colour has a realistic tone.  Visually speaking, however, it is slightly disappointing.  Unlike Thor, which was loaded with tons of eye candy, this film waits until the colourful pre-end credits collage to show anything eye-popping.  That may be due to the nature of the story but there was a few opportunities (like during the war bond drive) where the film does not take advantage of the moment to bring it.

What the film lacks in video it makes up for with audio.  Another solid 7.1 DTS-HD track that sounds amazing on my 5.1 set up.  It was mostly the atmospheric elements that caught my ears this time.  The background rumbling of Howard Stark’s prop plane engines when the crew was traveling behind enemy lines, or the sound of 1940’s Brooklyn traffic during the film’s early scenes do an excellent job of adding an additional layer of appropriate tone.  And assigning Alan Silvestri (Back To The Future) to deliver a modern music score with a ’40’s vibe is a lesson in perfection.

Most of the points go to the audio commentary by Director Joe Johnson, Director of Photography Shelly Johnson, and Editor Jeffrey Ford.  The three deliver the filmmaking secrets without getting too technical, and the overall experience is light but informative.  A must-listen to any fan of this film.

The rest is a mixed bag.  Another “Marvel One Shot” that takes place during Agent Coulson’s trip to Thor’s Hammer.  A must-see for Agent Coulson fans, I guess.  The featurettes consist mostly of on-set interviews from the cast and crew who are in full-on promo mode.  The exceptions are The Transformation which is a 9 minute look at the shooting of the “skinny Steve” scenes, but you really need to listen to commentary for an expanded take on it.  Two more about the origins of Captain America and the Red Skull in the comics are solid.  There are some deleted/expanded scenes too but these were cut for a reason.  No need to seek them out.

Some have told me how they found this movie to be boring, and perhaps like several other MCU films it falls into what I’m calling the “hype-trap”.  The movie is built up to be something that it couldn’t possibly live up to for the sake of getting your bum into a theater seat.  For me, I was never a fan of Captain America growing up so maybe the bar was set low when I first watched it.  I was surprised how they were able to put together a convincing story around a traditionally one-dimensional, corn-dog character.

But my bar was set much higher for this second viewing and I still came away with feeling that Captain America: The First Avenger is a good movie that I’d watch again.  Since first seeing it, this version of “Cap” has become one of my favorite characters and I even have his trademark Shield as the background on my phone.  I’d say if you didn’t like it the first time, give it another shot.  Several years removed from the hype might allow you to appreciate the film for what it is instead of what it isn’t.  Time might…. shield you from the hype… if you will.