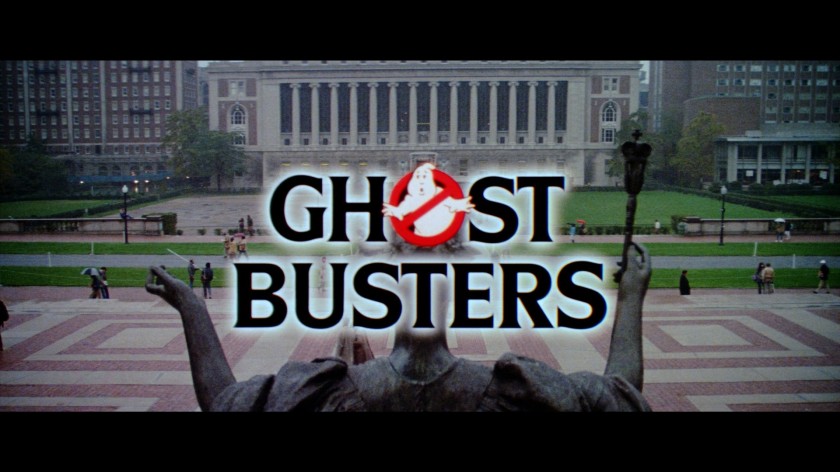 Extremely bias review alert!  Ghostbusters is like comfort food to me as I have watched this film more than any other.  It was there for me when I was sick, needed inspiration, or had a couple of hours to kill.  And that was only yesterday.

This is my 4th time buying it and 5th time owning it.  The film has been released several times on Blu-ray and this “Pop Art Steelbook” edition came out to coincide with the 2016 “Answer the Call” film.  Since this version contained the 4K remaster, all the extra content, a unique case, and was under $20 when bundled with Ghostbusters II… I figured, why not?  It’s Ghostbusters. 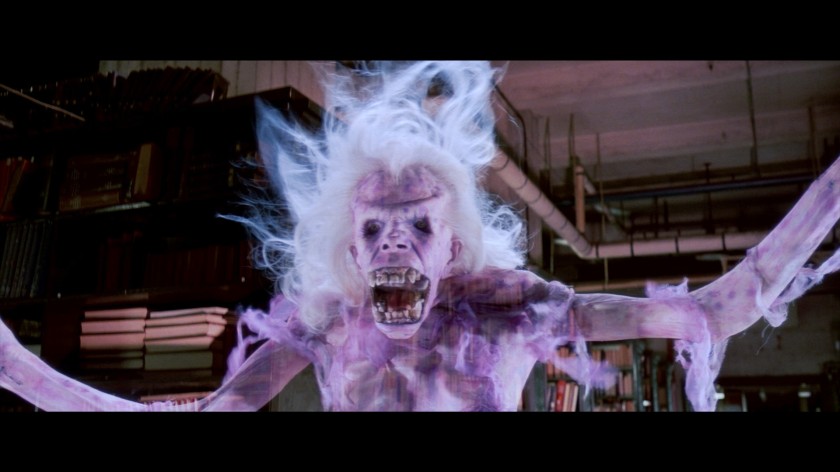 “I wanna go with them in the car.”
When three parapsychologists, Peter Venkman (Murray), Ray Stantz (Aykroyd), and Egon Spengler (Ramis), are kicked out of Columbia University in New York City for their unorthodox paranormal research, they decide to go into business for themselves… catching ghosts.  They develop some high tech equipment and set up shop in an old fire hall.

Business is slow to start with Dana Barrett (Weaver) as their sole client who claims her apartment is haunted.  They quickly reach local celebrity status, however, as the amount of ghost encounters mysteriously begin to rise in New York City.

When Dana becomes possessed by a demonic spirit named Zuul, the Ghostbusters discover her apartment is in a building designed to open a doorway to another dimension for Gozer, a god of destruction.  It is then up to the Ghostbusters to stop Gozer from bringing on the end of the world.

I’m not sorry to sound like an old man here, but they don’t make movies like this anymore.  Hollywood was doing something special in the 80s, which is not seen today.  I think, outside of the Pixar films (and even they are starting to turn to sequels) there aren’t many new universes to dive into and explore in film today.  We have many old or adapted ones for sure, but in the 80s it was all about taking inspiration from previous work and creating something new.  Ghostbusters definitely did that.

Aykroyd’s original script had the main characters and the concept of Ghostbusting, but also had some major expensive ideas like visiting other dimensions.  Director Ivan Reitman thought a New York setting and making the story about starting a business would ground the film in reality.  Harold Ramis was then brought in to flesh out those ideas and add his special brand of humor, and it all works.

Ghostbusters is still as funny and fantastical as it was in 1984.  New York kind of plays this extra character that really gives the film its edge and heart.  The special effects were state of the art at the time and are a wee bit dated now, but that’s okay because it doesn’t need them to be entertaining.  Its witty dialogue, spot-on pacing, and rich characters will keep you locked in until the credits roll.

What stood out to me/Memorable moments 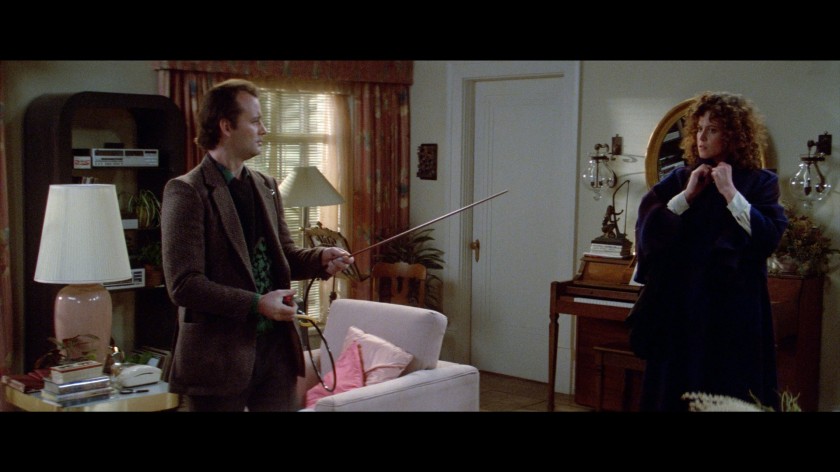 Ghostbusters is a raunchy comedy
I still laugh out loud at the jokes.  Not only was Bill Murray on a whole other level at this moment in time, but Harold Ramis’ writing needs a huge shout-out too.  His National Lampoon’s brand of raunchiness plays a part in what makes this film timeless, since sex in 1984 is still sex in 2017 (Thankfully!).  Getting Mr. Stay Puft laid, the Key Master/Gate Keeper, and Ray gets a BJ from a ghost!  Stuff that went over my head as a kid, but I can appreciate now.

Every Ghostbuster is there to connect with the audience
Ghostbusters is a good example of a film where every character has their place, but the Ghostbusters themselves are designed to be characters we can relate to.  Venkman is the leader and the one we want to be.  He always has a right or funny thing to say and it is how we perceive (or desire) our own sense of humor to be.  Ray is the excitement we feel when we see the Ghostbusters experience paranormal encounters.  Egon answers our questions and grounds the fantastical moments in science, and Winston (Ernie Hudson) brings the high-tech jargon down to a level we can understand.  These strong characters are a good part of why they were able to spin the film off into a successful cartoon series. 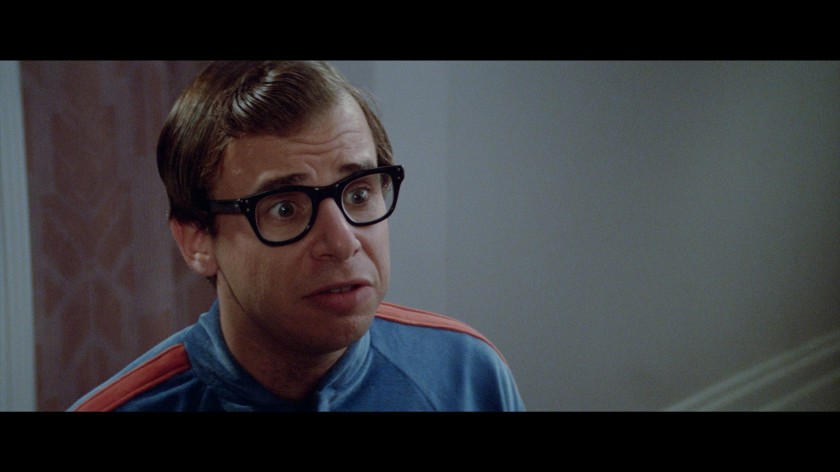 Rick Moranis is the unsung hero of this movie
He is not a Ghostbuster and he is not in the film all that much, but damn, does he steal every scene he is in.  Louis Tully might have been a dweeb, but instead of playing him as socially awkward or shy, Moranis plays him as fast talking and confident.  (Of course Dana wants to show up to his accountant party.)  This makes for way more comedic opportunities and allows us to not feel so bad when the evil stuff starts happening to him.  Brilliant. 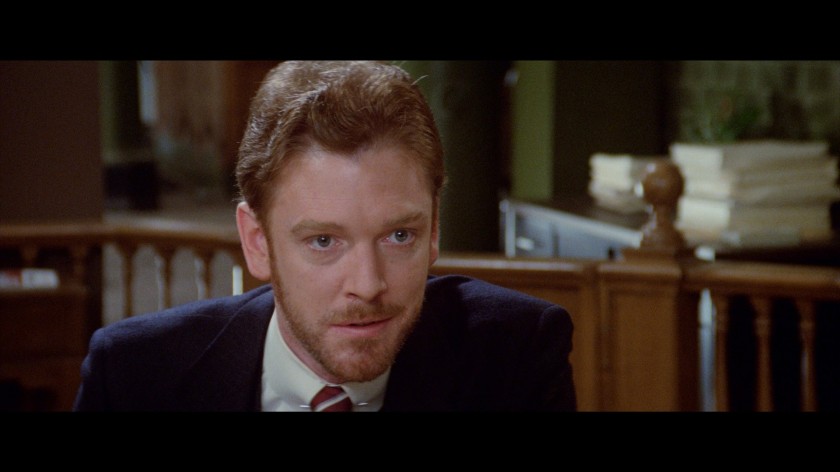 Walter Peck was misguided, but right
Set up as a foe for the Ghostbusters, Walter Peck from the Environmental Protection Agency was dick-less for shutting down their containment unit while believing they are con-artists.  He would have been justified, however, if his motivation was to ensure heath and safety regulations are in place, because they are not.  He may represent the Government coming in to take their jawbs, but if there was a private company running around your home town with mini nuclear accelerators, and had a giant energy-consuming device in their basement, wouldn’t you want someone to ensure guidelines are followed? 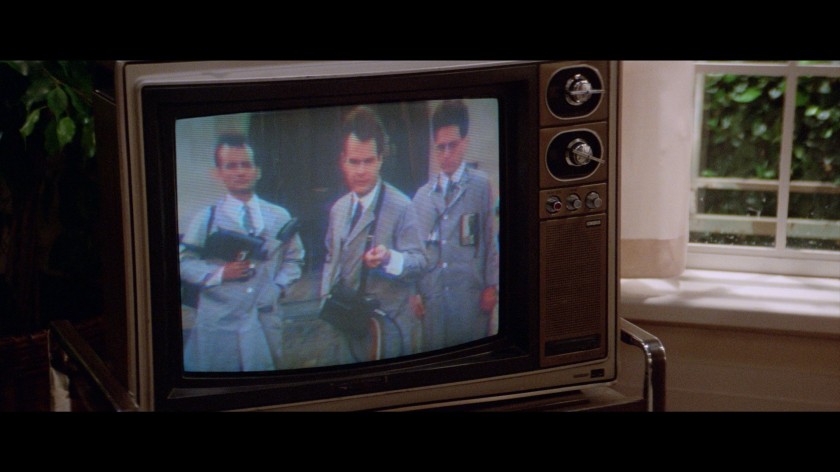 Video (3/5)
This was by far the best version I have seen yet.  The lettuce in Dana’s grocery bag looked crispy and green; good enough to eat.  I could count the scan lines on Dana’s TV during the Ghostbusters TV spot, and could see flies buzzing around Janine’s desk when Dana first pays the Ghostbusters a visit.  I am pleased overall, but parts of the film did have way more film grain than I would have liked.

The content itself is 5/5 but I have to dock it a few points since it is rehashed from the 20th anniversary DVD and the 2014 Blu-ray.  It’s as old as the DVD, but if you are a Ghostbusters fan and you haven’t listened to the commentary track by Harold Ramis, Ivan Reitman, and associate producer Joe Medjuck, you’ll want to do so.  These guys all had a ton to do behind the scenes and Ramis has a great memory for what parts of the script were written and what was ad-libbed.

The 2014 additions are a 30 minute interview with Ivan Reitman and Dan Aykroyd.  There is some interesting insight but it is nothing to write home about.

I have tried many times throughout the years to pinpoint what exactly it is about Ghostbusters that I like most above any other film.   Is it nostalgia? The familiarity with the characters and re-watching the film is like revisiting old friends.  Nah, forget that noise.  I love it because it’s a great movie.  Ramis and Aykroyd’s solid writing, the direction of Reitman to refine their ideas,  talented/comedic actors delivering some amazing performances, and a final layer of some wonderful special effects.  It all came together in 1983/84 to make Ghostbusters a truly special film.